A look through the permit shows that the building respects the six-storey height limitation of the area. Standing right opposition Junior College, the building also forms part of a student priority area, which has no capping of such one-bedroom housing units.

The biggest problem with this building is that the one behind it is only two storeys high, so there is a huge visual contrast that triggered people online.

But there’s a reason why this matter was not even dealt with in the case officer’s report.

The Planning Authority takes into consideration potential height, not actual height. So since the back property can also at some point be built to six floors, the authority cannot act as if the property will always remain at its current height.

In fact, the architectural designs considered by the PA show the ‘third-party property’ as being as high as the one being proposed. The original plans presented to the Planning Authority 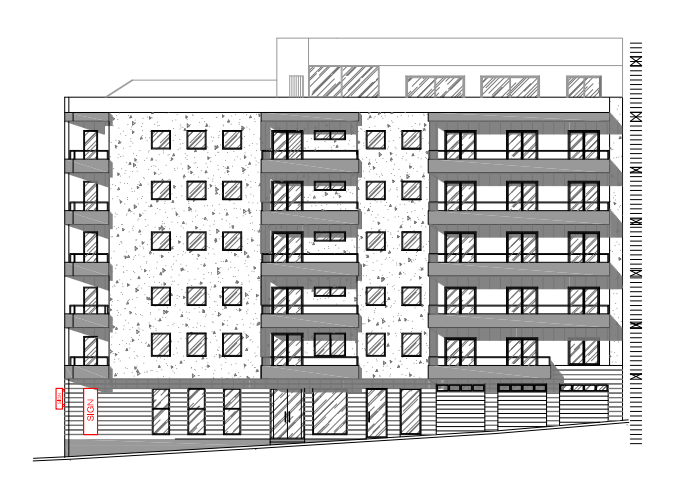 Lovin Malta reached out to the architect of this project, Joseph Stellini, and he gave a candid response.

“It certainly is not an architectural gem. It’s a nondescript building, like 99% of the others in the area. It occupies an awkwardly-shaped site and it conforms to the policies,” he said.

The “awkward” shape, he said, was a result of how the roads in the area were planned out back in the 1960s.

“I understand the criticism, but what’s the solution? Should we stop building within the height or space limitations set out by the law itself?”

The photos of the building doing the rounds on social media show only the view of its tapering corner, which he says was chosen to shock and is “misleading”.

“Ironically, the development offers an internal environment which is probably better than average. The internal area of the apartments is much larger than the minimum required and all the apartments have a wide, south-facing facade.”

The smallest apartment is just under 50 square metres, but this is also within the minimum dwelling space requirements for the area.

“Abroad, even 36 square metres is enough for a one-bedroom dwelling,” Stellini said.

A floorplan from the original plans

He said the corner of the building was originally intended as a small terrace, but it makes more sense to be used as a bathroom to maximise internal space. In any case, this corner screens the blank party that will very likely be eventually built by the neighbour.

“We’re creating shadows for the property behind us, but surely the neighbours are aware that the loss of direct sunlight is a small price to pay when they too stand to gain when they build their own six storeys.”

“For the last 20 years, I’ve seen how things works. The general public begs architects to persuade the Planning Authority and politicians to increase height limitations. Then, when we build to these new limits, people complain that Malta has become ugly and things aren’t being built in a uniform manner.”

“It would be great if the owners of a whole street were to agree to lower their height limitations. Their property would probably still retain its value since these places are becoming so rare now. But mostly everyone, not only developers, feels compelled to exploit their own land,” he says, echoing a similar idea recently floated by the Environment and Planning Minister.

“As a State, as a society, if we want a new direction for planning, we need to come up with one. But it’s very difficult,” he said. ”In the meantime, our society can dedicate itself much more to good design on all levels, but more often than not, this requires money and a great deal of commitment,” Stellini added.

The apartments are not for sale because the developer is building them for rent, particularly to students.

Do you have a similar story you’d like us to look into? Get in touch with [email protected]