Nationalist MEP and European Parliament President hopeful Roberta Metsola has condemned the tossing of a Molotov cocktail at a Belgium MEP’s home while his family was asleep.

“All my solidarity & support to MEP Pascal Arimont and his family after their home was vandalised and a Molotov cocktail thrown under their children’s bedroom,” Metsola tweeted.

“It is shocking and horrific. We must be united against hate and extremism. I hope the culprits are brought swiftly to justice.” 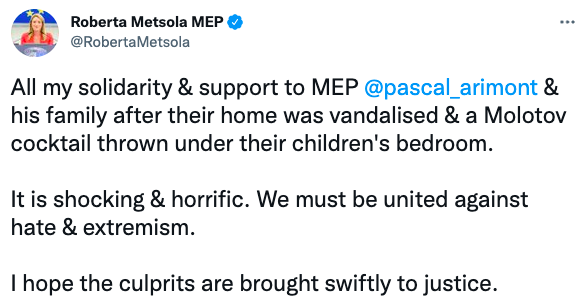 Arimont said he believes the attack was the work of anti-vaxxers and retaliation for a Facebook post in which he affirmed his trust in science with regards to the efficacy and safety of COVID-19 vaccines.

“I can handle criticism. I can stand someone criticising me or my work. What has happened now is going too far. Way too far,” he wrote.

“My family and I had hate speech sprayed on the garage door of our house last night. This is already an act that should be condemned in the most harsh way, since an important line of freedom of expression and criticism has been crossed.”

“But we also found a Molotov cocktail that was deliberately thrown at our facade at night, a metre under the windows where our kids sleep. I am speechless and terrified.

“My family and I have to fear for our lives now because I am not allowed to have my opinion?

“I myself am vaccinated, but I have always spoken out against a general mandatory vaccination.”

“They call me a ‘coward’. But how cowardly is it to want to start an arson in a house where children are sleeping?”

“I will have to protect my wife, my children and also myself. I hope the police will find the perpetrator.”

Belgium has faced a wave of protests against COVID-19 restrictions in recent days, with thousands marching in Brussels yesterday to condemn new rules obliging people to present COVID-19 passes to enter bars and restaurants.

The demonstration was mostly peaceful, but at one point, a group of protesters wearing black hoods and chanting “liberte” (freedom) reportedly threw cobblestones and fireworks at the police, who reacted with teargas and water cannons.

READ NEXT: No Warden Can Just Cancel A Ticket, LESA Head Insists After Report That Politicians Had Fines Forgiven