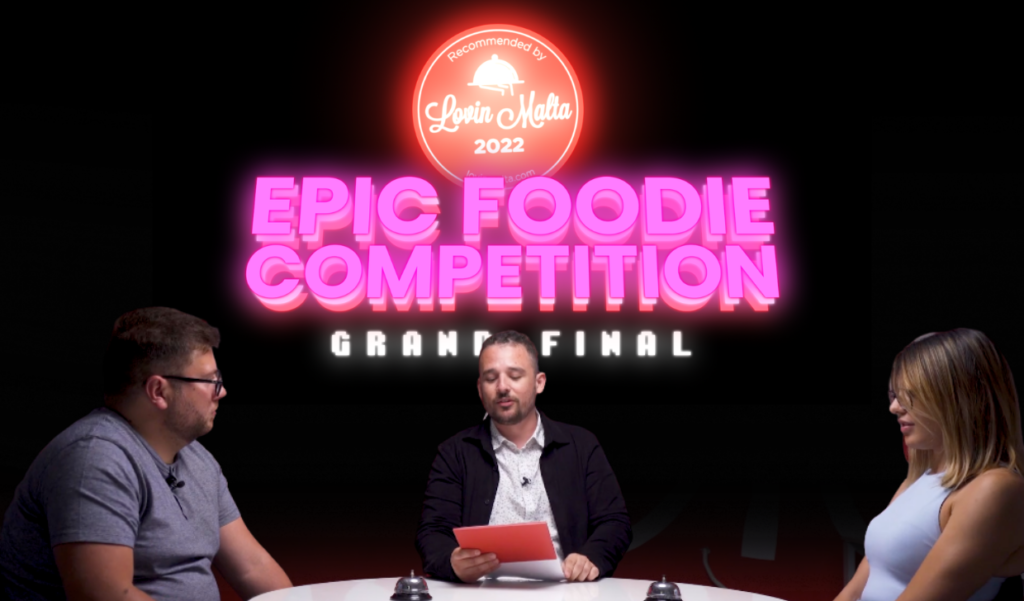 Ladies and gentlemen – after months of searching high and low across the Maltese archipelago seeking the one true foodie, the only person deserving of an entire year’s worth of incredible meals, the hunt is finally over.

In an edge-of-your-seat finale that saw the final prize up for grabs until the very last second, one Maltese foodie came out on top, just ahead of all the rest.

In case you missed it, our three Epic Foodie Competition finalists were: Tara Bonello, Andrea Tonna and Julia Azzopardi.

After Tara failed to make it to the third and final round of the competition, it was down to Andrea and Julia to prove just how serious they were about Maltese food.

The ending was as nail-biting as could be, with Andrea coming in with a last-minute push to take home the prize – but Julia’s knowledge and taste buds just could not be beat.

The head-to-head-to-head battle to the top now sees Julia walk away with one major final prize: over €5,000 worth of meals for two across over 100 of Malta’s most delicious restaurants and eateries. Aside from this spectacular prize, Julia will also be receiving two private chef experiences with Matt Vella and Rafel Sammut respectively, and a cooking class with the culinary geniuses over at the Mediterranean Culinary Academy. Now, best of luck to all of Julia’s friends and loved ones, who will be doing their utmost to be named her plus-one to these incredible meals and experiences.

As our runner-up, Andrea himself will not be leaving empty-handed. He too will get the chance to sample some meals, treats and dinners over at some of the newest and coolest eateries around including: AYU Traveller’s Kitchen, Mamma’s Sugar, Grana in Gżira, Chickeria, Don Royale, Obi Japanese Fusion and Hammett’s Monastik.

And for everyone else – stay tuned for some exciting new updates on the next edition of Lovin Recommends – just make sure you are following Lovin Malta’s social media platforms to be up to date with the latest in the Maltese foodie world.

Shoutout to the 7,000+ Lovin Malta followers who took part this year, and best of luck for the next one!