For a town that is officially just 55 years-old, San Ġwann has heaps of history. From refreshing green valleys to drool-inducing international eateries, this urban hub offers locals and visitors a huge selection of interesting sights.

Check out the artifacts, architecture, and awe-inspiring sights that make San Ġwann the Maltese gem that it is.

Despite being a relatively new church, having been consecrated in 1962, San Ġwann’s Our Lady of Lourdes Parish Church is representative of the town’s rich history.

As the Second World War subsided, the Capuchin Fathers of Malta were entrusted with Msieraħ – the locality that is now known as San Ġwann. Initially, only two friars were responsible for Msieraħ, Fr Feliċ Scicluna and Fr Joseph Mary Spiteri, but over the years, the congregation grew bigger. A few years later, in 1949, works began to construct a church and friary on land donated to the order by Joseph and Feliċ Borg. The foundation stone of the Our Lady of Lourdes Parish Church was thus laid in 1953, with the church getting inaugurated six years later and consecrated three years after that.

As the years passed, more and more residents starting flocking to San Ġwann, so much so that they eventually started demanding that the town’s status is upgraded to that of a parish. The plea was eventually accepted, and on 21st September 1965, San Ġwann became a parish, with Our Lady of Lourdes as its patron saint.

Nowadays, the Our Lady of Lourdes Parish Church hosts three processions every year – an Our Lady of Sorrows procession, a procession on the eve of Corpus Christi, and another on the day of the village feast.

San Ġwann’s parish church is just one of the town’s five places of worship – but we’ll get to those later!

Having been established as a parish just over 55 years ago, San Ġwann is nonetheless interwoven with ample historical artefacts of national importance.

Perhaps the most important of these are the Tal-Mensija cart ruts, the oldest man-made remains in San Ġwann.

The cart ruts are thought to have been carved out during the Bronze Age, that is between 2300 – 1000 BC. Whilst the exact purpose of cart ruts is still unknown, it is thought that they were used to facilitate transport. These remains are potentially indicative of the former presence of a prehistoric agricultural community who made use of Wied Għomor, Wied il-Ballut, and Wied Għollieqa. Wied Għomor is also home to a number of megalithic stone blocks that are thought to have belonged to a Neolithic structure.

San Ġwann is also home to four chapels, all significantly older than its Parish Church.

The 16th century Chapel of the Annunciation, located in the Mensija area, is associated with a popular local legend. Legend has it that in the 1400s, a farmer in the area noticed a streak of light coming out of a crack in stone. The farmer dug down to create an entrance, only to find a lamp lighting up a holy image. Whenever the image was taken away from the cave, it would miraculously reappear in the same place. This prompted residents to clear the cave and turn it into a chapel. The Santa Margarita Chapel is thought to have been built in the 16th century, although  it fell into disrepair a few years after. In 1658 however it was renovated and started being used regularly to celebrate mass. The chapel was unfortunately destroyed during the Second World War but was later completely rebuilt in a 17th century style.

The third chapel in this locality is the San Ġwann tal-Għargħar Chapel. Built in the 16th century, this place of worship is nowadays used by the local MUSEUM for lessons in cathecism.

The latest San Ġwann chapel to get restored is the one dedicated to St Philip and St James. This was built way back in 1730 by Fr Gaspare Giuseppe to satisfy farmers’ spiritual needs.

Places of worship aside, San Ġwann is also home to some very interesting historical buildings. Torri ta’ Lanzun, a farmhouse built way back in the 15th century, has served a whole plethora of uses. It got its name from one of its residents, Wenzu Lanzun, who inhabited it during the 1676 plague. In the 18th century, this was enlarged to transform it into a fortified building to protect citizens against pirates. During the Second World War, this farmhouse even served as a hunting station for the Grandmaster of the Order of St John.

If we fast forward to the 1950s, when the Cold War was still going strong, Europe was under threat of nuclear conflict. Due to the fact that our country was extremely reliant on imported food at the time, the British Colonial Office decided to construct underground flour mills all over the Maltese islands to produce bread in case of emergency. One of the seven mills can be found in San Ġwann.

This was built/excavated from 1954-1955 and consists of an entrance tunnel which leads into a large chamber.

San Ġwann celebrates the feast of Our Lady of Lourdes on the first Sunday of August – and whilst this town isn’t exactly known for its feast, its Band Clubs remain active all year round. Be it through bake sales or fundraising activities, these organisations try their hardest to remain close to the San Ġwann community all year round.

This town has its very own bruncheria, offering an ever-changing list of specials guaranteed to keep you wanting more. Alternatively, get a taste of something a tad more exotic at San Ġwann’s very own Thai street food joint! If you’re looking for something downright decadent, San Ġwann’s also got you covered. With its very own burger and ftira joints, this town’s ready to satisfy pretty much anyone. From Kappara to Mensija, San Ġwann’s made up of a plethora of different zones – and they’ve all got something totally unique to offer.

Surrounded by Kappara, the University of Malta and Mater Dei, San Ġwann’s Wied Għollieqa is pretty much North East Malta’s green lung. This valley’s home to a number of unique species – including the weasel, rare fungi, and Malta’s national tree, the sandarac gum tree. After a good amount of rainfall, you can also spot a freshwater stream flowing down from San Ġwann to a small dam beneath san Ġwann tal-Għargħar.

San Ġwann’s also home to the picturesque Wied Għomor – a valley considered by ecologists as one of the country’s few remaining green lungs. Wied Għomor spans all the way to St Julian’s, making it the perfect location for a challenging Sunday morning trek.

If you’re not up for a long walk but still want some fresh air, then make sure to check out any one of San Ġwann’s 13 public gardens which come well-equipped with their very own picnic areas.

Have your four-legged friends join in on the open-air fun at San Ġwann’s very own dog park. Alternatively, go on a bit of a walking tour and check out the town’s aviaries and olive tree grove. There’s also something for the fitness fanatic in all of us!

San Ġwann has a whopping three outside gym areas and three separate areas with play equipment and a multi-purpose pitch. Bliss.

Bet you didn’t expect to find a full-on resort in the heart of San Ġwann. The Urban Valley Resort and Spa is pretty much its very own ‘mini village’ within this town. Offering a wide range of rooms, suites, and penthouses bound to get you feeling relaxed in no time as well as a plethora of restaurants – this place will be your home away from home. 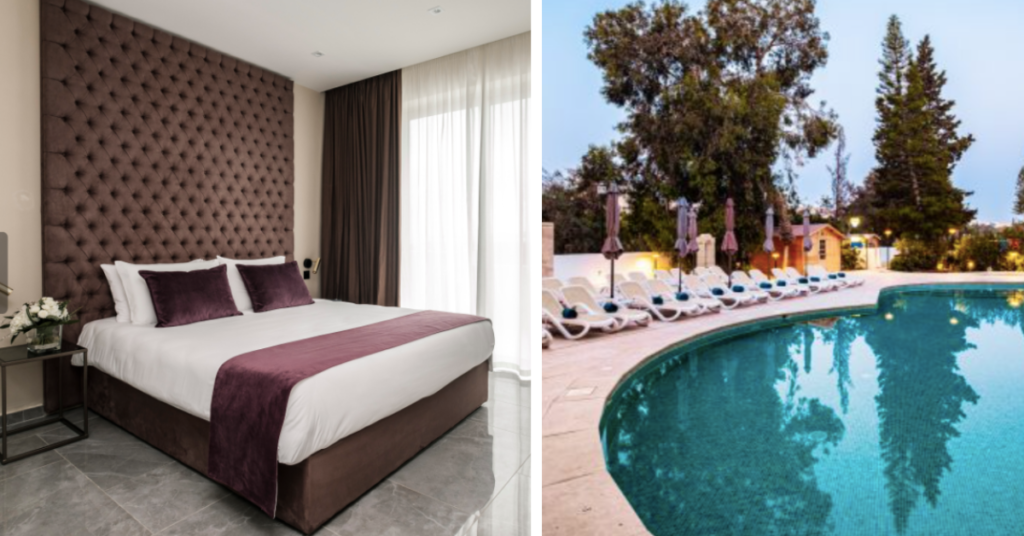 So whether you’re looking for a relaxing weekend break, a night out with your loved ones, or a cool location for your next big conference, Urban Valley’s got you covered.

Which town should we focus on next? Let us know in the comment section!