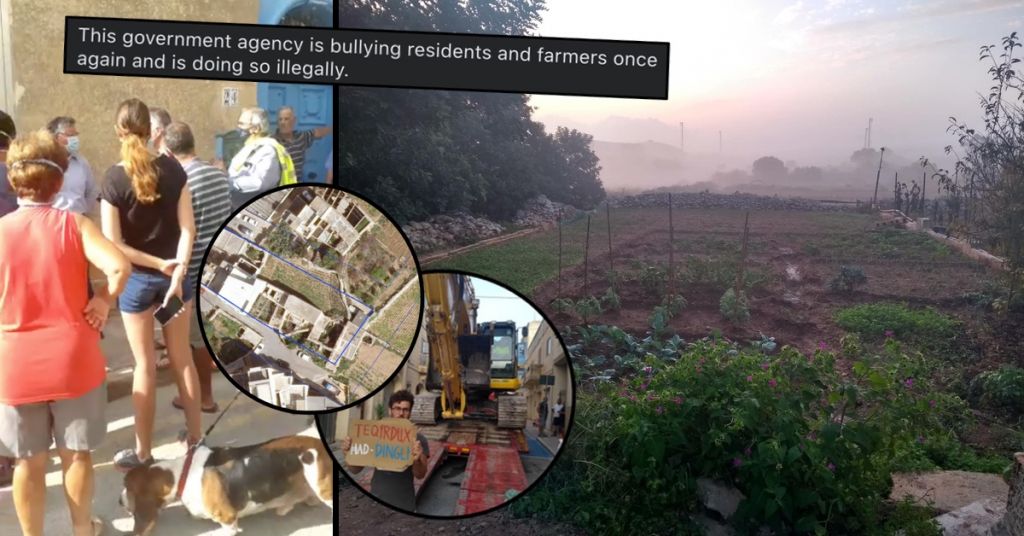 Moviment Graffitti arrived in Dingli this morning to protest a road alignment project which is set to destroy private fields, old carob trees, and rooms used for farming… all without approved plans and permits.

“Infrastructure Malta has decided to start building a road on farmer’s land in Daħla tas-Sienja without any permits whatsoever,” Moviment Graffitti said earlier today. “This government agency is bullying residents and farmers once again and is doing so illegally.”

In the last couple of weeks, residents had noticed some commotion in the area, later finding out about the project. “Then, all of a sudden, a massive digger arrived this morning,” one activist explained.

Members of Moviment Graffitti – along with residents, farmers, police officers and representatives from Infrastructure Malta – are now on scene.

“The question remains – who stands to gain from this random road alignment? Definitely not the farmers.”

“We will be staying here,” one Graffitti activist announced during a live video currently being streamed from the site. “We’re here to stop them, come and join us.”

“With these works, not only will the Planning Authority and Infrastructure Malta be sanctioning the destruction of pristine agricultural fields and rooms used for farming purposes, but also ancient carob trees belonging to private tenants,” Gerald Lapira, the owner of the land set to be impacted by the project, told Lovin Malta earlier this week.

READ NEXT: ‘Nobody Is Safe’: Dingli Road Alignment Project ‘Without Permits’ Set To Destroy Private Fields