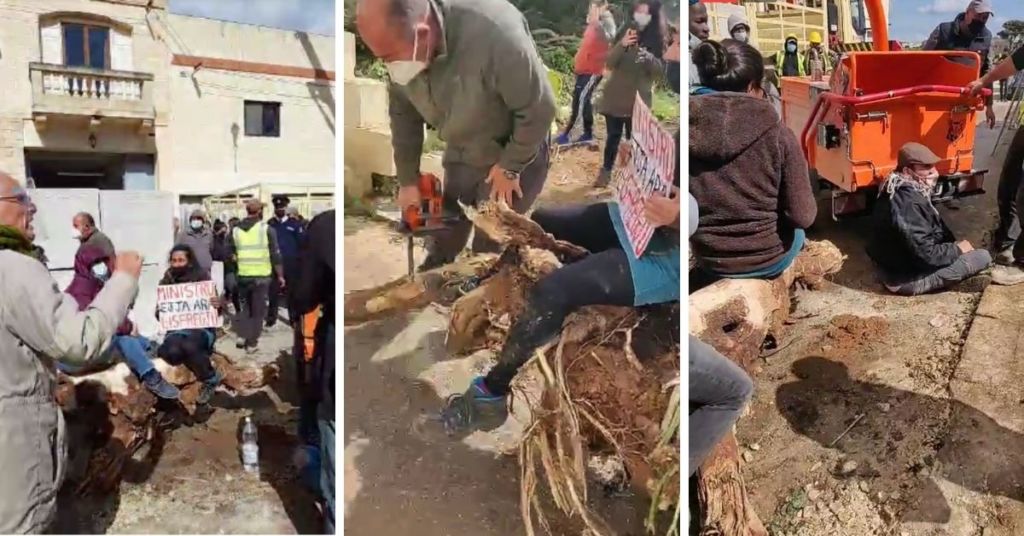 Infrastructure Malta is still in talks with the Salesians of Don Bosco over the expropriation of a piece of land that has been earmarked for the construction of a new road.

In addition to currently being a green area with a number of carob trees, it is also in the vicinity of a medieval chapel which would be placed at risk by the works, activists have said.

Over the past week, activists from Moviment Graffitti have been camped in the area in a bid to stop the works from going on. In addition to being unnecessary, the group insists that the works are illegal.

Infrastructure Minister Ian Borg has denied this, insisting that all the necessary permits were in hand.

In a statement issued on Thursday, the Salesians of Don Bosco insisted that the scheduling of new roads and any expropriation of land “should always be done for the common good with the least damage to the environment which is so limited” in Malta and should only happen when “really necessary”.

“The Salesians assert that the construction of the new road is a major loss of their private property, which property is still in the process of being expropriated and the compensation due to the expropriation of this property has never been discussed and is still to be received,” read the statement.

According to the Government Lands Act, if the government identifies a piece of land needed for public use, it is legally entitled to buy it, or use it for 10 years.

In order to do this, the Lands Authority must make a declaration saying that that the land is needed for expropriation and stating what the public purpose for the land will be, as well as how much will be paid in compensation.

This declaration needs to be published in the government gazette, along with two newspapers as well as at the site itself. Anyone with an interest in the land may contest the public purpose within a period of 50 days.

If no contestation is made, the authority may deposit the compensation in a bank account set up for this purpose and take possession of the land. Once the deposit has been made, the ownership of the land is considered to have been transferred to the government.

Owners of land being expropriated can contest the amount of the compensation granted, though this will not stall the actual expropriation.

The process is fairly one-sided, favouring the interests of the government, but it does offer owners some basic rights.

In a bid to get works done as quickly as possible, it seems that in many cases Infrastructure Malta has opted to bypass this process and start works before an agreement has been reached with the Lands Authority, as appears to have happened in this case.

In their statement, the Salesians note that they had been one of the various organisations in Dingli to have benefitted from works conducted by the Department of Public works.

“Acknowledging the importance of the Dingli Salesian Youth Centre’s mission, which benefits hundreds of youth from all around Malta, the Salesians accepted help from the Department of Public Works in order to improve its facilities. However, the above-mentioned project started before the Salesians were informed about the works in relation to the road.”

They also clarified that no discussions had ever been held with regard to the remaining “carob tree area”, which is also their property.

Do you think this road should be built?

READ NEXT: Prisoners Are Not Left Naked When Entering Kordin, Ministry Says As It Breaks Down Enrolment Procedure