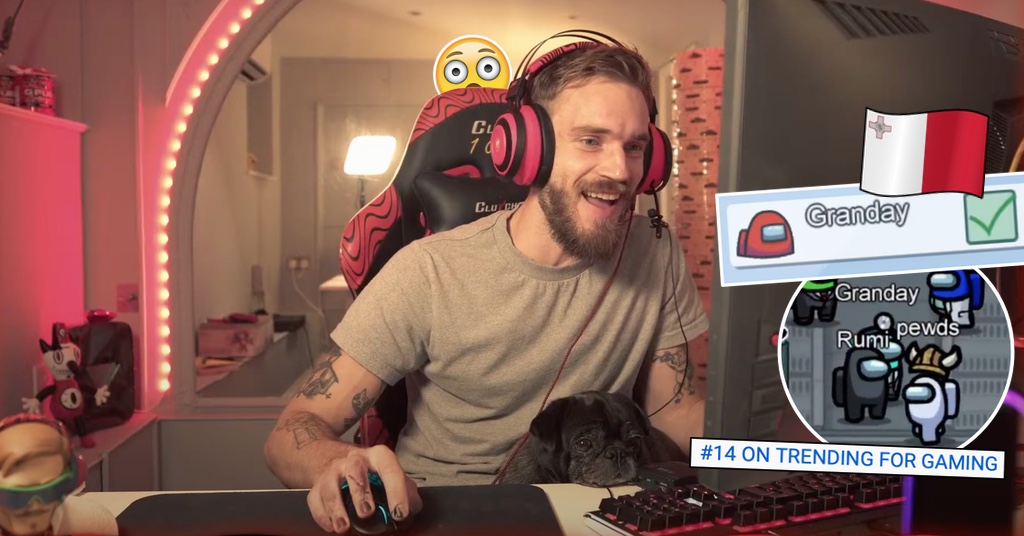 More than 106 million people are currently subscribed to PewDiePie, who still stands as the most followed person to ever have a YouTube account. But fans of the Swedish gaming giant might’ve noticed a smaller, just as beloved name playing alongside him last week… none other than Malta’s meming pride and joy, Grandayy.

Taking to a two-hour livestream on 7th September to play a couple of rounds of the increasingly-popular Among Us, Pewds took it in turns to face off against nine different YouTubers. From oldtime collaborators CinnamonToastKen and Boyinaband’s Dave to new favourites like Corpse Husband, the games ended up being a smorgasbord of popular content creators.

So young Maltese YouTuber Grandayy, with his 2.75 million subscribers and more than 600 million views, fit right in.

And while this isn’t the first time the islander and the Swedish celeb have crossed paths – Pewds has frequently acknowledged and even praised Grandayy’s meming prowess – playing alongside (ang against) each other must’ve been something quite different.

Grandayy even manages to win a couple of rounds, and is heard saying “I have no idea how I managed to win twice as an imposter” (the game’s outnumbered bad guy). “Because you’re so innocent,” Corpse chimes in. “No one ever wants to kill you.”

“Playing with PewDiePie – and all the other YouTubers – was really cool, and I had a lot of fun,” the Maltese meme king told Lovin Malta over the weekend, looking back at the awesome opportunity. “I had talked to some of the YouTubers before, including Pewds, so while I was a bit nervous (especially since it was live on his channel), it was pretty chill still. They’re all very nice people even away from the camera, so it went great.”

“It was pretty epic,” Grandayy continued, reminiscing. “Most of the games I played didn’t make it on the final edited video (which already has just under six million views and is currently one of the top trending gaming videos on YouTube), but I made my own edit.”

Sure enough, if you want to watch even more rounds featuring Malta’s top YouTuber and the world’s top YouTuber going head-to-head in a game all about trust, lies and space murder, then check out Grandayy’s video:

READ NEXT: Welcome To The ClubHouse: Nine Maltese Teen Influencers, Blindfolded And Taken To Their New Extravagant Villa