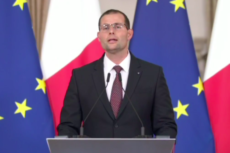 Triumphantly returning to Malta, Emma Muscat has secured a strong fanbase on her home island – but her stellar performance on the show wasn’t enough for some people. One small detail about Emma has hundreds of people fuming and instantly losing interest in the young, talented artist.

On every video from every news outlet excitedly speaking to Emma minutes after she landed at the Malta International Airport, there were scores of comments calling for her to stop “showing off” by speaking in English.

Putting aside the fact that Emma can speak Maltese (as witnessed on Xarabank mere hours later) this attitude towards a figure they were blindly supporting not too long ago is very telling. And the worst part is many saw it coming from a mile away.

While chatting with her parents on Amici, Emma’s accent instantly gave away the fact that Maltese was not her first language. While many noticed (and noted) it, the ‘pride’ at watching a Maltese person succeed on a show this big was enough to put off the criticism… but not for long.

The day before her arrival, one simple comment (on a fan page, no less) made it evident that shit was about to hit the fan. “I can’t wait for Emma to come home,” one woman wrote (in Italian). “But mostly I cannot wait to hear her speak our beautiful language.”

So of all the amazing things Emma is to expect in the upcoming months, from new music to a blossoming relationship with co-star Biondo, the one thing that would bring this fan joy is to hear Emma speak in Maltese.

There’s no harm in having pride in the Maltese language, quite the opposite – it’s a powerful language with deeply historical and cultural roots. But how can you watch an 18-year-old girl soar through weeks of intense competition and just sit there thinking: “can’t wait till she says ‘bon?u’!”

Over and above the freedom to communicate in any language she wants (especially one that’s listed as an official language of the country), Emma being able to speak English as a first language gave her a serious leg-up in the competition. While others suffered with their diction, Emma breezed through many of her covers.

Rather than trying to diminish her achievements because of how she chooses to speak, shouldn’t we be celebrating her and the uniqueness that is Malta’s language situation? Why not take pride in the fact that some people prefer Maltese, others prefer English, and some even choose which one to speak in different situations? Why not be excited by the rich cultural influences this can have?

Emma’s international success should never have descended into another ‘language war’. It should have been the chance to celebrate a young Maltese girl doing incredible things overseas. And while the comments mocking her for speaking in English probably won’t stop, we hope she won’t stop to read them either.