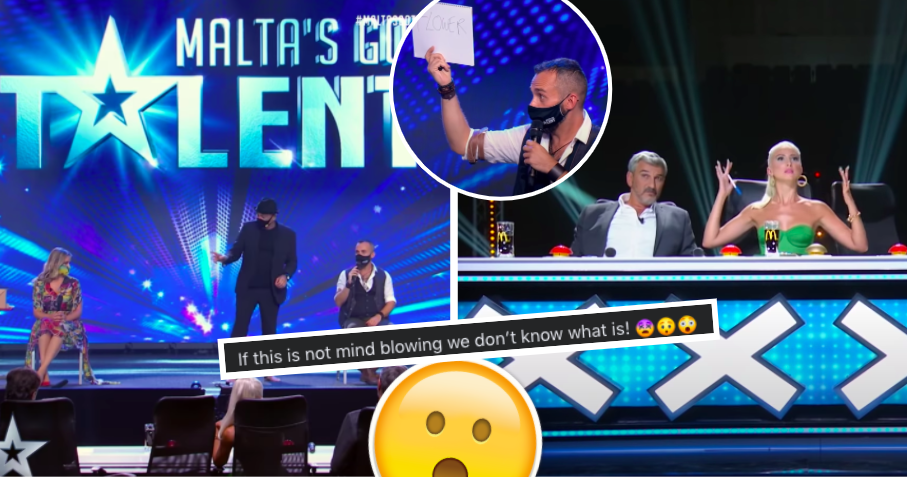 The first episode of Malta’s Got Talent kicked off last night with some amazing acts making it through to the next round.

But it wasn’t until the end of the evening that all four judges had their minds blown with a paranormal act that left them stunned and the contestant leaving the building with four resounding yeses.

With just two volunteers, a couple of pieces of paper and the ability to penetrate people’s minds, mind-reading mentalist Michael Mock managed to transfer a telepathic message between judge Maxine Aquilina and host Gordon Bonello and we’re still trying to figure out how this is even possible.

Unlike a magic trick, Mock relies on mind control and manipulation to get both volunteers to think of the same word and write it down on a piece of paper.

And like a true mentalist, Mock carries out his act seamlessly and with a confidence that has convinced us that magic is real.

And it impressed the judges too, so much so that Mock received four yeses!

In the world of show business, save the best for last, and Malta’s Got Talent definitely delivered on that front.

There were plenty of great acts during last night’s premiere, and some great reactions from the public too.

Tune in next week for the second round of Malta’s Got Talent!

What did you think of last night’s show? Let us know in the comments below

READ NEXT: People Really Had Feelings About The Malta's Got Talent Debut Episode Last Night