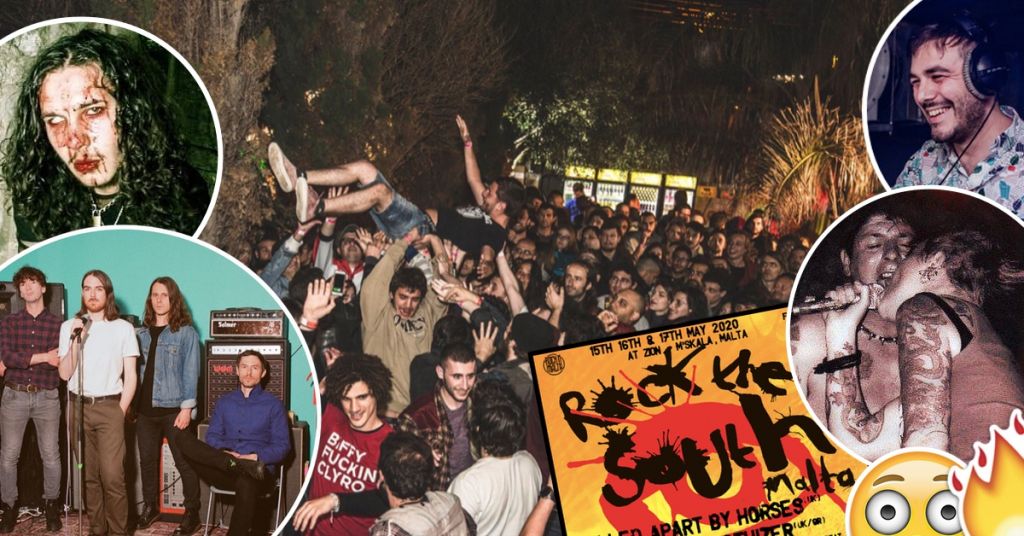 Malta’s alternative scene has had a particularly busy decade, with dozens of bands erupting onto the scene and capturing the hearts and minds of the musician-heavy scene. But as one of the island’s most important musical appointments returns for a ninth year, things are really set to shift into overdrive.

Rock the South 2020 has just unveiled the blistering line-up for its return to Marsaskala’s Zion, and it’s definitely looking like one of the local alt scene’s biggest years in a while and a half.

Beyond the endless list of local acts – upcoming and well beloved alike – which we’ll get to soon enough, this year’s Rock The South boasts a couple of international headliners that are set to satisfy any self-respecting music lover’s ears.

It’s difficult to have come of age in the alternative music scene in the last decade and not have heard of Pulled Apart By Horses.

Debuting just over a decade ago, the four-piece went from playing small gigs in their hometown of Leeds to supporting the likes of Biffy Clyro, Foals and Muse in just a couple of years.

Four studio albums later, PABH are ready to unveil their latest offering, looking forward to a brand new approach to a tried-and-tested heavy sound. And with a bunch of heavy Maltese alternative bands having been inspired by PABH at one point or another, this headliner announcement is guaranteed to go down a treat.

Balothizer, meanwhile, is a power-trio band based in North London that has a signature fusion of Cretan music, poetry and traditions with heavy bass lines and thunderous drumming.

Their unique sound and energy is something that’s pretty tough to put into words, mostly thanks to the unique blend of Western experimental and Cretan folk music, to the point that there really is no way to really explain it without actually listening to it.

Returning to Malta for what promises to be another great gig is American post-rock outfit Staghorn.

Bringing their unmistakeable brand of hypnotic, captivating sound – not to mention an incense stick or five for added scented ambience – Staghorn tells the story of a fictional post-apocalyptic group of people who have travelled back in time to warn humanity of an animal revolt in the future that will eventually leave mankind on the brink of extinction.

Channelling that vibe in everything they do – two of the band’s members currently even live off the grid, employing an exhaustive DIY attitude – Staghorn is another one of those bands that just has to be seen, heard, smelled and experienced live to truly understand.

Hip hop is undeniably at the very heart of the international music scene’s zeitgeist right now, and Italian rapper Yung Belial embodies the genre’s freshest and most experimental branches.

Gone are the gangsta rappers of the 00s; today’s hip hop has embraced everything from jazz and electro to emo and metal, and it is in the latter that this young rapper finds his playground.

Speaking of Eddie Fresco, an exhaustive list of Maltese artists will also be hitting this year’s Rock The South for one particularly heavy edition.

Punk and metal legends alike will make appearances in the form of BNI, R.A.S, Nomad Son, Dripht, Bila and The Areola Treat.

Meanwhile, alt sweethearts like Yews, Danjeli, Djun, Eyes To Argus, Roża, Krishna, Bark Bark Disco and Beesqueeze are all set to feature throughout the three-day festival.

But beyond all that, a separate stage will see even more bands, electronic artists and DJs take to Rock The South’s most unique stage… the Silent Disco.

Brought to you once more by White Noise, this tent will see attendees through the later hours of each night, with headphones pumping music straight to your eyes for a surreal partying experience you’re going to want to try out.

With DJ crews like Black Plague and Bass Culture hitting the Silent Disco on Saturday and Sunday, Friday’s opening day sees the tent turned into a whole stage for Band In A Camp, a night of music featuring Lucy’s Last, Oxygyn, Hearts Beating In Time and Radju Ħaj among others.

Rock The South Full after video 2019

Hey y'all…. so the wait is over Rock The South Malta is back for 2020 at Zion Reggae Bar on the 15th 16th 17th May. We are working hard to give you the best line up yet for the 9th edition of this amazing event. Here is the full video of last year's edition and keep posted !!!

Posted by Rock The South Malta on Thursday, November 14, 2019

But beyond the endless list of musicians, one of this year’s biggest features is the poster itself, which comes straight from the mind of an insanely talented designer with a CV to die for.

Noticeably different from previous editions, this year’s Rock the South poster has been designed by Andy Vella, the UK-based artist who has worked extensively with the likes of legendary band The Cure.

Adding his own signature twist to the now-established festival, Andy Vella came up with a poster that’s so cool, it was even rumoured that previous international acts who had played actually wanted to return just because of his addition!

Check out Andy Vella’s awesome design – and the full lineup for Rock The South 2020 – below, and get ready to be hyped. Slightly later than the usual April appointment, the ninth edition of RTS will coincidence with the grand unveiling of Zion, which has underwent some serious renovations ever since the Marsaskala restaurant was torn down back in 2019.

With so many new and exciting things to look out for this year, RTS 2020 is definitely going to be one for the books for any Maltese hipster, hip hop fan, metalhead, punk or general fan of downright good music.

More information can be found on Rock The South’s official Facebook event page, and tickets can be brought right here, right now.