Comino’s iconic hotel is getting a radical facelift, with the project’s architects aiming to showcase sustainable design and architecture that respects the natural environment, all while generating a zero-carbon footprint.

Taking inspiration from the striking yellow stone of the island, the new hotel, which will have 70 rooms, would nestle into the topography of Comino, with trees that reflect the biodiversity of the surrounding environment. The pool area is built to reflect salt pans found across Malta and Gozo.

Bungalows, which rest along Santa Marija Bay, will change into roughly 20 low-lying three-bedroom villas resembling white blocks, taking inspiration from sites across the Mediterranean. A restaurant will also be built.

The rooms and residences will be mixed between short and long leases. No units will be sold. It will take two years to complete with Hili Ventures dishing out a €110 million to €120 million investment. Unveiling the plans to the press, Hili Ventures’ architects, Belvedere Architecture, made it clear they were looking at the project as a natural continuation in the island and were keen to transform the architectural debate in Malta.

The project aims to ensure sustainability, with respect for nature a core design principle. All construction will be prefabricated, with the restoration of terrain and biodiversity also on the agenda. An on-site sewage plant will be constructed, with an area behind the chapel targeted.

They hope that throughout construction and operation, the hotel will keep a zero-carbon footprint. The hotel from the east

The actual floor plan, they say, will be far less than what is already being occupied. At the site of the hotel, more than 3,000 square metres of terrain will be restored, with reservoirs and other crucial services for the hotel going underground.

The architects have proposed other projects around the island, which would help showcase the island in its entirety. 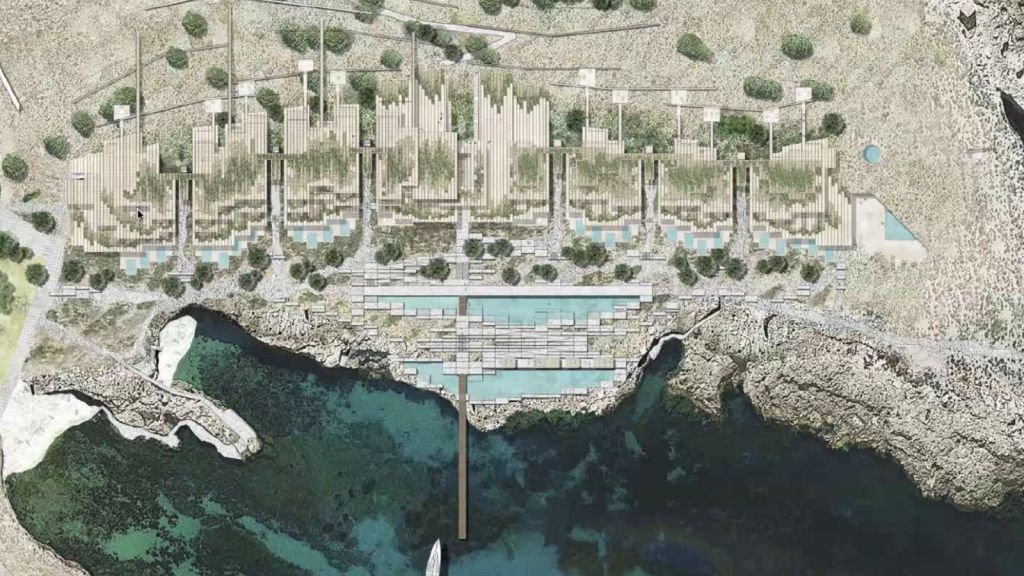 While they made it clear these suggestions are simply contributions and not part of their permit, the architects proposed cleaning up paths across Comino. This will include developing signage, creating seating spots, and restoring buildings on the island.

Blue Lagoon should also be changed, they say, with a greater focus on preservation and management of the area, providing a clear distinction between what architects described as “the sacred” and “the profane”. perspective from the back of the hotel A floating pontoon, they propose, should be constructed to move away kiosks and other commercial activities away from the island. The pontoon will be removed at the end of every season.

The pig farm, lying on the south of the island, should be converted into a solar farm and botanical gardens. While noting the limitations of introducing a solar farm on the island, the architects said it would allow Comino to be entirely self-sufficient.

What do you think of the design? Let us know in the comments below

READ NEXT: 'I Am Struggling With Anger': Sister Of Chris Pandolfino Reveals Battle To Move On After Brutal Murder