Adrian Hillman, the former Allied Newspapers managing director at the centre of a complex and high-profile money laundering case, has broken his silence… to post an article about fake news.

Hillman took to Twitter this evening to post an article from The Conversation about how people with a greater level of emotional intelligence are more likely to spot fake news.

It was his first comment on social media since police prosecuted 11 people, including former OPM chief of staff Keith Schembri and Nexia BT partners Brian Tonna and Karl Cini, in what has become the highest-profile money laundering case in recent Maltese history.

Lovin Malta has asked him where he currently is and whether the police have been in contact or made demands regarding his return to Malta to face charges.

Hillman was last known to be residing in the United Kingdom, where he is researching a PhD in the construction of news at Goldsmiths University.

Sources have informed Lovin Malta that the former newspaper boss will be brought to the country to face charges as part of a new post-Brexit extradition agreement with the United Kingdom. 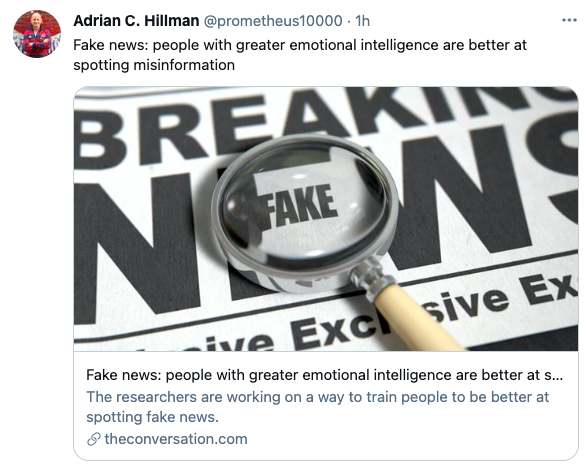 One inquiry is related to allegations that former OPM chief of staff Keith Schembri channeled over €650,000 to Hillman between 2011 and 2015. The other is related to suspected kickbacks amounting to €100,000 from the sale of citizenship between Schembri and Nexia BT’s Brian Tonna.

On Friday, police inspector Joseph Xerri laid out a complex web of transactions to show how Schembri, Hillman, Kasco CEO Malcolm Scerri and former Progress Press chairman Vince Buhagiar split a $5 million profit after selling printing machines to Progress Press at an inflated price. It appears that Hillman received well over €1 million in all.

Xerri added that documents written up by Nexia BT’s Brian Tonna, Karl Cini and MFSP’s Matthew Pace to say that the payments were for consultancy were falsified as no consultancy was ever given.

“It’s a clear case of bribery to buy machines from Kasco,” the inspector testified, saying that Progress Press paid around US$6.5 million more than it should have when procuring the machinery.

The transactions pre-date Schembri’s seven-year tenure as OPM chief of staff but stretch out to 2015, by which time he had already occupied the powerful role for two years.

READ NEXT: If Schembri Laundered Millions From Times Of Malta, How Much Did He Steal From The Rest Of Us?