No matter who you are or where you were yesterday, it’s safe to say 20th November 2019 will go down in Malta’s history as one of its most eventful days. From an early-morning army operation that set the mood for the rest of the day, to a late-evening protest that went from frustrated but solemn to an explosive standoff outside Parliament, it all played out on one sunny but fresh Wednesday.

But how did it all come to a climax in Valletta at 7:30pm?

Here’s everything that went down yesterday, and how it all connected back to the assassination of investigate journalist Daphne Caruana Galizia just over two years ago.

At around half five in the morning, still under the cover of relative darkness, the yacht ‘Gio’ left the Portomaso marina completely unperturbed. Just under 15 minutes later, though, AFM patrol vessels intercepted the yacht just outside of Pembroke.

Some time later, the AFM boats – along with the yacht itself – returned to Portomaso, where a rigorous search of the yacht continued in the marina.

The yacht belonged to Yorgen Fenech, the owner of 17 Black, the Dubai-based company that was allegedly set up to transfer millions to the Panamanian companies owned by former energy minister Konrad Mizzi and the Prime Minister’s chief of staff Keith Schembri.

The news came less than 24 hours after Prime Minister Joseph Muscat announced that he recommended a presidential pardon for the middleman in the assassination of Daphne Caruana Galizia. The major businessman onboard the yacht was shortly confirmed to have been intercepted by AFM in connection with the October 2017 murder of Caruana Galizia.

Meanwhile, a rigorous search onboard his yacht continued. 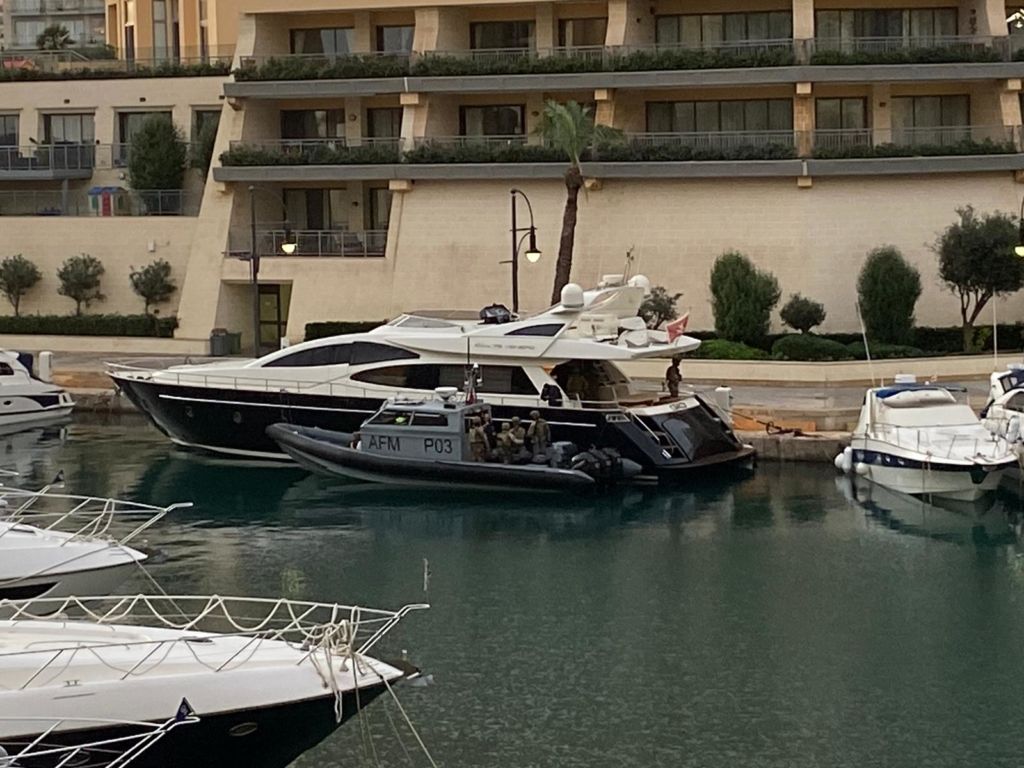 A couple of hours after the operation outside Portomaso, Daphne Caruana Galizia’s son Matthew took to Twitter to question why the Prime Minister’s chief of staff Keith Schembri had not yet resigned in the wake of Yorgen Fenech’s arrest.

Confirmed: Yorgen Fenech was on the boat and tried to escape Malta. This is the man whose role was to remit bribe payments to Muscat’s chief of staff. Who is still his chief of staff. https://t.co/2sMbu6lzMO

The former leader of the Opposition was one of the first political figures to comment on the latest revelations, strongly calling for the resignation of the Prime Minister following the arrest of Yorgen Fenech.

“The Prime Minister’s position is untenable,” Busuttil said on Wednesday morning. “He must RESIGN NOW and let JUSTICE take its course.”

Busuttil’s reaction quickly joined a long list of Facebook statuses, comments and Tweets, from people congratulating the officers on the successful operation, to others demanding the arrests of Keith Schembri and Konrad Mizzi.

“The whole issue is I must await the process to conclude,” Muscat told journalists just after 10am. “If you are implying that Keith Schembri or Konrad Mizzi have something to do with the crime, the information I have so far is that they don’t.”

When it was pointed out that Schembri and Mizzi had planned to enter business with Fenech after the 2013 election, Muscat said he had no indication as of now that any politician is implicated in the murder.

“I’m not giving a blank cheque; I’m just saying what the situation is up till today at 10:30am.”

He appealed for prudence, arguing that he himself has had to hold back certain comments over the past two years out of fear of prejudicing the case.

“I’ve been keeping certain things to myself for two years and I await the proper time and moment to get everything off my chest,” he continued warily. “However, because of what other Prime Ministers before me did, I know that every word I say will be used to destroy the case.”

Pressure groups announce a protest in Valletta for that evening

“If you are a member of civil society, if you feel you’ve been lied to time and time again, if you feel that those whose duty it is to safeguard our country and institutions have betrayed the country, then you need to be at Castille today, Wednesday 20 November, at 6pm to demand parliamentarians remove Joseph Muscat from the post of prime minister if they don’t get his resignation first,” pressure groups Repubblika and Occupy Justice and blogger-activist Manuel Delia urged people on Facebook.

“Joseph Muscat is accountable for what he himself described as ‘an assault on our democracy’. Now he must leave. If he doesn’t, he must be fired.”

“Melvin Theuma operated a white taxi outside of the Hilton Hotel, and he was close friends with Mr Fenech,” a white taxi operator who spoke on condition of anonymity told Lovin Malta. “He owned one of the 10 taxis operating in that area.’

Melvin Theuma, who is believed to have been arrested in connection to a money-laundering ring, has reportedly not been operating the taxi – number 237 – himself, but employed someone else to operate it for him for the last two years.

A second person further corroborated the story, saying that Theuma sometimes acted as the personal driver to Fenech.

A third source added that Theuma would act as a “fixer for anything” that Yorgen requested of him. “If Joseph Muscat hadn’t protected Keith Schembri and Konrad Mizzi in 2016 my mother would still be alive. He has blood on his hands,” Caruana Galizia tweeted.

Caruana Galizia finished by urging people to attend the incoming protest that evening.

If Joseph Muscat hadn’t protected Keith Schembri and Konrad Mizzi in 2016 my mother would still be alive. He has blood on his hands. https://t.co/T4kLXmFjyd

“I don’t want to get into the merits of the case, but has anyone realised that we’re living in a country where a Prime Minister can negotiate a presidential pardon for a case in which the main suspect is the business partner of his own chief of staff?” Debono said on Facebook. “It’s the stuff of horror films.”

“For this reason alone, obviously along with a million other reasons, Muscat should have already resigned on the spot,” Debono continued. “I don’t want to get into the merits of the case at all and obviously everyone has a right to the fair hearing, the right to which is being broken so long as the Prime Minister doesn’t resign.”

Addressing an online crowd while in Zagreb for a European People’s Party congress, Delia announced he’d be flying back to Malta as soon as possible.

Calling for prudence with regards the ongoing police and judicial investigations, Delia did say the arrest of Fenech has clear and obvious political connotations.

“The Prime Minister today tried to give the impression that the only reality is that of investigations and courts,” Delia said, flanked by key PN figures who were with him in Zagreb. “However, he must also tell us about the fact that Keith Schembri still shares his office.”

In a document published on Wednesday early afternoon but signed to the 12th of November, the Tumas Group Company Limited announced Yorgen Fenech “resigned with immediate effect from his position as a Director and Legal and Judicial representative of the company”.

Yorgen Fenech was involved in five industries – hospitality, property, gaming, energy and shipping, with the Tumas Group’s assets estimated to be worth over €350 million as of 2017.

Yorgen was replaced by his older brother Franco Fenech “with immediate effect.”

Within the hour, Yorgen Fenech’s resignations from most, if not all, of his companies started pouring in. Konrad Mizzi stands defiant, telling the press he would not resign

“Today shows that our institutions work,” Mizzi told Lovin Malta when he was explicitly asked whether he believed it was time to step down. Evading direct answers to questions on Electrogas, 17 Black and getting the country into business with the suspected mastermind of a journalist’s assassination, Mizzi simply brushed off leaked documents which showed that his offshore company Hearneville had listed the mystery Dubai company as a target client.

While answering questions by PN deputy leader Robert Arrigo in Parliament, Joseph Muscat refused to dismiss both Mizzi and Schembri.

“I have been saying for two years that I will resign, Muscat said. “Don’t worry, I will go, but not now, as the country needs leadership and I will not abdicate my responsibilities.”

After Arrigo pushed the Prime Minister for an answer a second time, to which Muscat did not reply directly before Arrigo gave notice that the party would be walking out.

Screenshot from video coverage by The Malta Independent

A protest in front of Castille kicks off

“Muscat is politically responsible for this assassination,” Manuel Delia told the frustrated crowd, who frequently erupted in angry boos and shouts, chanting “Korrotti”, “Barra” and “Ħabs” whenever Schembri and Mizzi’s names were mentioned.

“If Joseph Muscat doesn’t leave, it’s your responsibility to remove him,” Delia finished to the increasingly raucous crowd.

The congregation arrives at the contested Caruana Galizia memorial

After a short walk down from Castille, the people gathered in front of Court, quickly filling up the square in front of the Great Siege monument that has recently become a makeshift memorial for Caruana Galizia.

The air was sombre as people lit up the square and quietly sang the National Anthem.

As the protest organisers told people that it was time to head home, some members of the audience shouted out that “some of the ministers are still in Parliament” and “their cars are still parked there”.

As the crowd thinned, people started making their way up Republic Street to Parliament. The crowd arrives in front of Parliament

As people started realising that some ministerial cars were still parked in front of Parliament waiting for the ministers to exit, an increasingly loud crowd started gathering, hurling insults at anyone slowly trickling out of the building.

Owen Bonnici exits the Parliament, and the crowd surrounds his car

Frustration turned to anger at the sight of the Justice Minister, and cries of “corrupt” and “purċinell” filled the air as people rushed Parliament barricades and blocked any potential exit for the minister’s car.

It would take just under half an hour – and various other stops including one just outside of Castille – for the minister’s car to finally be able to drive away from Valletta and the chasing crowd.

At around 7:44pm, the ministerial car – missing one of its GM 12 number plates – leaves Valletta from Castille Square.

What do you make of yesterday’s very eventful day?