Nationalist MP Kevin Cutajar has criticised a viral Facebook meme which made fun of his disability, urging people to engage in critical arguments rather than personal attacks.

“I would like to thank everyone who expressed solidarity with me after someone uploaded an unkind Facebook post,” Cutajar said, referring to a meme which made fun of him being visually-impaired.

“I would have thought that in 2021, we’d be mature enough to criticise the argument rather than the person, and it’s clear that the person who uploaded this comment was unable to criticise my arguments.”

“This comment won’t discourage me from working to ensure that people with disabilities like myself no longer need to face such stupid treatment.”

Cutajar received a flood of support this evening, including from the national body promoting the rights of people with disabilities. 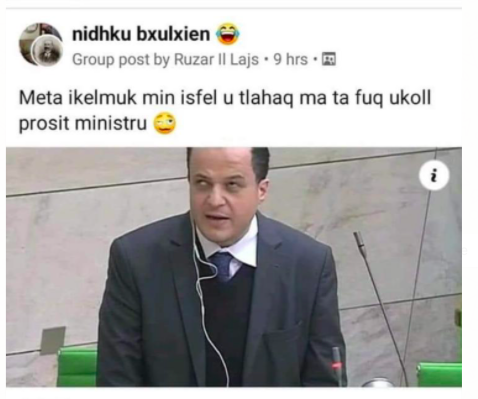 “After speaking to Hon. Cutajar, we will be taking action according to his wishes,” the Commission for the Rights of People with Disabilities said.

Labour MP Oliver Scicluna, who until recently was Disability Commissioner, confirmed he filed a report against the Facebook meme with the CRPD.

Inclusion Minister Julia Farrugia Portelli described the meme as one which reflects poverty of thought and action.

“It’s shameful that someone tried to ridicule my colleague, who has a disability, like this,” she said.

The Nationalist Party warned such “attacks” against people with disabilities stand in the way of progress.

“We urge the authorities to take all the necessary action to ensure this case never repeats itself,” PN MP David Agius said. “We express our full solidarity with Kevin Cutajar and encourage him to keep working for the good of the nation.”

The Labour Party also condemned the meme, stating that disabilities are no joking matter and reminding people of plans by the government to amend Malta’s hate speech laws, so as to include disabilities as a protected characteristic.

What action do you think should be taken?

READ NEXT: Minister Reveals Malta Was Facing A Major Food Crisis Last Year: ‘It Made My Blood Run Cold’