One year ago, Daniel Holmes was driven to Malta International Airport in the middle of the night with a police escort. There, he was bundled onto the airplane with a wave, and sent back to his home country, Wales, after eight years locked in a Maltese prison.

Holmes reunited with his long-waiting wife Marzena, and two daughters he barely knew. Ready to return to his own life, he soon realised that picking up the pieces was going to be much harder than he thought.

The world had changed, moved forward and digitised. Marzena had had a lovely home waiting for him on his release – but after some months, it flooded, forcing the family to go between living in a tent in the Welsh outback and a charity home.

Lovin Malta caught up with the man the Maltese courts had called a drug kingpin.

Living with survivor’s guilt, and trying to survive day to day, Daniel Holmes has penned an open letter detailing his struggle to reintegrate back into society after being put through the Maltese justice system.

“The one thing I still can’t catch up with is how fast time moves. Days are so busy.”

One year of freedom later, this is Daniel Holmes’ open letter. 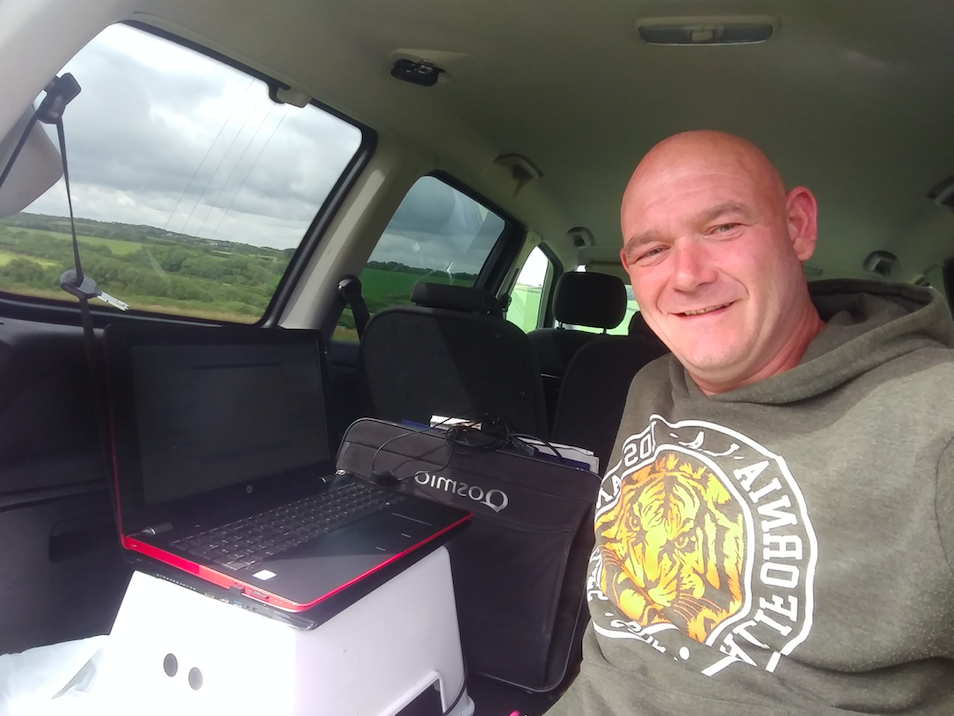 Daniel at work in his 'office'

“So, what have I been up to in a year? Well it’s been a roller coaster. Obviously finishing the book has been my number one challenge. At the same time, I’ve been writing a poetry book and a short story collection, while working on what I hope will be my first fiction novel.”

“On the 24th of this month, I’ve been invited up to the South Bank Center in London for a night of poetry where I’ll read a few of my poems, including ‘The Ghost Inside’, which won Gold in the Koestler Arts Awards last year and which has been published in their latest book, ‘Koestler Voices: New Poetry from Prisons Vol.2’.” Daniel Holmes and his daughters attend the Koestler Arts Awards

“Since leaving prison and Malta, things have been tough.”

“To resettle into a society that is alien to me has been emotional. Since the flooding in April of the house we live in, owned by my parents and without which we would be homeless, we’ve lived in hotels for around three months, and in a tent in west Wales for another three months. Only the ripping of the tent one night in a storm forced us back to Cardiff and once again into a house provided by a charity.”

“We have realised that stepping away from it all is the only way. Because of that we have been slowly removing all the useless possessions from our lives, those things that strangle us. I heard it said once: ‘Only surround yourself by things which are practical or beautiful’.”

“So, that is our mantra, minimising all the things we own into a few boxes. Our plan is to buy a caravan in the new year after the birth of our coming new boy (due 16th December), and tour, where we can, to find some peace away from the hustle and bustle of the world that rejects.” The tent Daniel and his family lived out of

“I’m looking for a piece of land that I can set up as a haven for people who feel that more in life, means having less and working hard for those things.”

“We now educate our two children at home, feeling that society has nothing to offer them, only the insecurity and paranoia of youth. The capitalist world that has sprung around us, is sick with hatred.”

“I can see that in my life, spending so long incarcerated by the Maltese authority, only to have them take my so-called crime and turn it into a multi-million Euro crop for the same people who sentenced me, killed my friend and which still has men, women and children rotting in their jail without hope.”

“Unfortunately in this life, morals mean so little and waver with financial blindness. It is impossible to be a part of that.” “I still have no bank accounts or passport. I struggle with ill health from my time in Malta and the tide of PTS and survivor’s guilt brings me to tears daily.”

“I still see the faces of those left behind bars and it’s hard to enjoy my so-called freedom, while others taste oppression.”

“As a family, we have been spending more time in nature. The forests and mountains of Wales are un-comparable. We have been foraging hazelnuts, mushrooms, apples, berries and anything we can collect for free, bring home and preserve so we can at least eat fresh good food.”

“All the food in shops seems tainted with chemicals and commodities that we don’t understand and don’t need.”

“There seems to be a wave of responsible people that are fed up with the state of the world and long for a more simple life. Maybe it is a dream of dreamers, but I believe I can set up this haven, dedicated to living right. The responsible education of children, the value of everyone in the community and less dependence on impersonal technology and more dedication to the actual connection between humans. I’m still looking for this land, it will not be a quick process.”

“Planning the next few books and planning to make some dramatic changes come 2020. I still haven’t had a party or night of celebration, although every day my family and I are aware that the lives we lead are but, by the grace of God. In that, we celebrate daily.”

“Time is so fragile, so fleeting that the common worries of man are almost comical. All we hear on the news is about Brexit, in an era where the world should be coming together, we still squabble over land, money and resources. We need nothing in life apart from what we are born with: A clean soul, a hunger for knowledge and unconditional love. All the things we lose, as we age as hard as the dust of bones we walk on.”

“I have no hope to go back to the mindset I once had. I thank the Maltese authority for my imprisonment.”

“A little time imprisoned and I would have been corrected to and by their values. But with the time I served almost 8 years, it was so long that I missed so much.  I thank them for their harshness, blindness, corruption and greed as the time away from that was enough to realise the evil of the world.”

“Telephones used to stay in pockets, the answering of them was rude in company. Now people sit around tables together all on their phones and it is acceptable. The quality of living has been quantified by what we own rather than our real worth. People walk around separated from the planet and to our connection of souls.”

“I sound like a rather old hippy I know. It is not easy.  Even now I get nightmares of stark prison cells, and when I’m alone the silence is deafening.”

“Cannabis is still illegal and if I was to admit that I have smoked copes amounts in the past year I would incriminate myself, so I won’t. Cannabis use is everywhere. In Cardiff one struggles not to smell it in a day, just walking around, and I know that is the same everywhere on the globe.”

“I and many like me have been a victim of persecution for a minimal choice that really means so little in life. To the people who smoke it, it means nearly nothing, one choice in a billion in life. For those who don’t, it has become a figurehead to fight.”

“One day the rights of cannabis smokers will fall into the history books as another attempt to suppress the choices of man that failed. Brought down by the very people who banned it, purely for financial gain. That is the sickening thing. That all the laws we live under are only in place for their monetary weight. We are a commodity of the powers above us and they play with our existence.”

“All my friends either died in prison, are stuck in Malta where I cannot return or have become so distant from me by my separation, that I am alone. I am lucky to have a family, a best friend as a wife and children who amaze and inspire me, if not for them I would not have survived or had the will to survive these years.”

“I was broken and shattered by the injustice on myself and those around me, slowly I am putting the pieces back together. So it has been a roller coaster of life. And hopefully, the ride will not finish too soon. The writings I hope to publish next year will be the hardest to publish. With my story, I have a soap-box to stand on and I hope to continue speaking while my lungs have air and my words have relevance.”

“One year on, I cannot believe I am free, possibly because the world is not free. It is a multiple choice tick sheet of free will. Any deviation from those choices are deemed wrong and shunned. I am not alone in my thoughts, but it feels a lonely road. I like the rest of the world and humanity have a long way to go, but while we keep looking and following the path we become closer to the end and the answers.”

“It’s strange as I still see Maltese names on businesses and houses. Reminding me that while I am banned from returning to Malta, (although I’ve never received any formal writings of my ban) I am never far away from the island or her people.” READ NEXT: ‘Locked In A Van, Inside A Small Space, Within A Prison, On An Island’: First Look At The Daniel Holmes Tell-All Book