Malta looks set to introduce a gender quota system in Parliament after the Nationalist Party officially endorsed a government proposal to boost the number of women in the House.

Opposition leader Adrian Delia has been a harsh critic of the proposal, warning in an interview with Lovin Malta last February that it risks sending across a message that women need political discrimination in order to succeed.

He also argued the proposed system contradicts with the rights given to people who identify as non-binary.

“There’s already an incongruence from government, which had originally removed or warped the definition of gender to widen it from male and female and now, all of a sudden, we’re taking about male and female,” he said.

“It seems the government has already changed direction there. When it was best suited to talk about LGBTIQ, it did, and now all of a sudden it’s male and female again.”

However, these concerns aren’t reflected in the PN’s official position paper, which was recently published by the government alongside the proposals submitted other stakeholders.

Instead, the PN said it agrees in principle with the government’s proposal for a ‘gender corrective mechanism’ to kick in if the under-represented sex obtains fewer than 40% of the seats. The government is proposing that this be capped at a maximum of 12 seats, which will be equally divided between the PL and the PN. 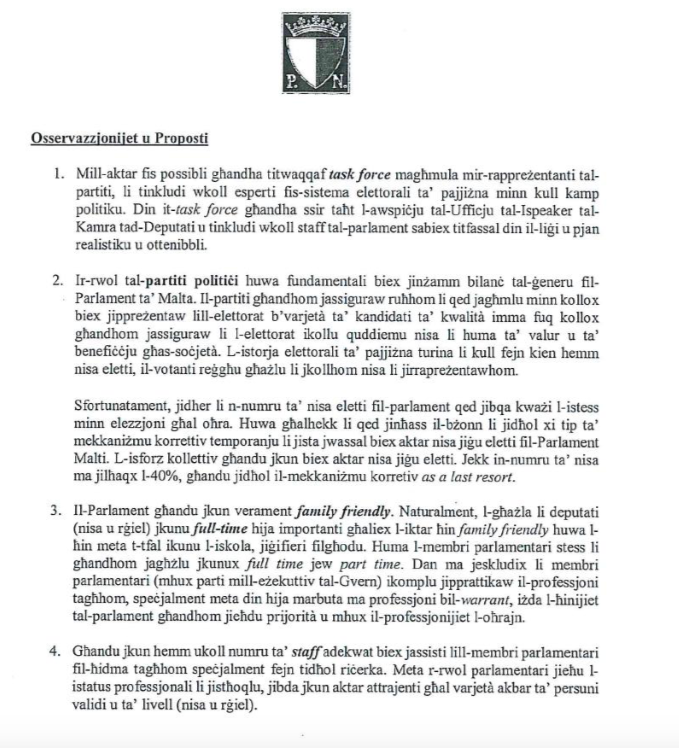 “The PN believes that a corrective mechanism by itself isn’t the solution and that measures and initiatives should be introduced to change the culture and strengthen the position of women in Parliament,” the policy paper states. “To do this, we must understand why Maltese women are holding back from contesting elections. This is the real problem and the lack of women in Parliament is only the symptom.”

“Political parties must ensure they do their utmost to present the electorate with a variety of quality candidates, including women of value who will benefit society. Electoral history has shown us that when women get elected, their constituents tend to keep on choosing them to represent them.”

“Unfortunately, the number of women in Parliament has remained the same throughout the years which is why we must introduce a temporary corrective mechanism so that more women will get elected to Parliament. We must make a collective effort for more women to get elected and if the number of elected women doesn’t reach 40%, the mechanism must be introduced as a last resort.”