At a press conference outside Parliament, the NGO’s president Robert Aquilina reminded Abela of the massive street protests the group helped organise in 2019 in the wake of Yorgen Fenech’s arrest for the murder of journalist Daphne Caruana Galizia.

“It seems that Robert Abela and the others who formed part of the Muscat administration have already forgotten how, 19 months ago, we managed to depose a Prime Minister who thought he was untouchable,” Aquilina said.

“It seems they have forgotten that they had to flee like rats from Parliament’s underground tunnels.” 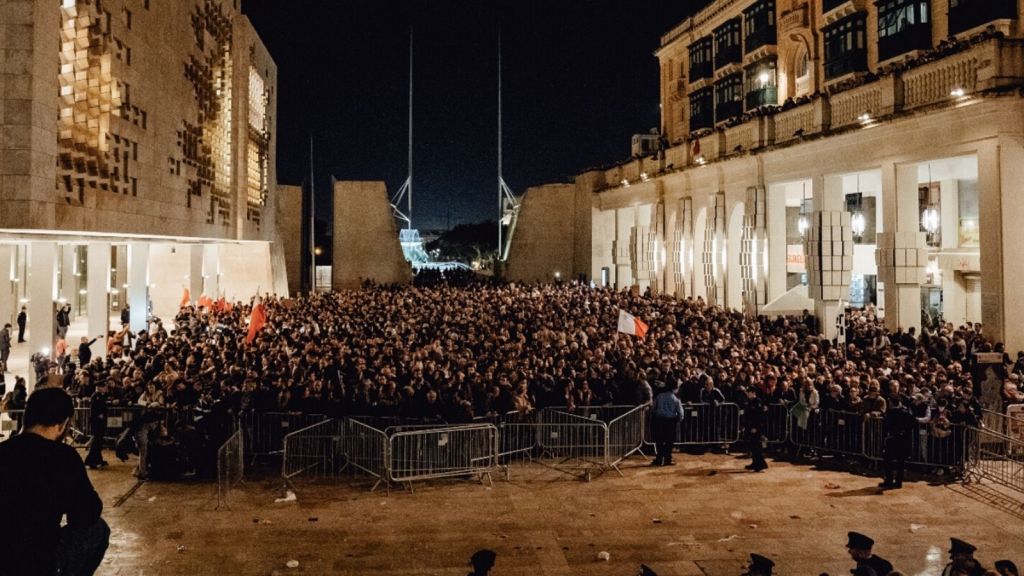 The 2019 street protests culminated in the resignation of Joseph Muscat

He insisted that Rosianne Cutajar must be sacked from the PL parliamentary group following her dealings with Fenech, and that Edward Scicluna must be removed as Central Bank Governor.

He also warned police commissioner Angelo Gafa that Repubblika is “disappointed” at the lack of major prosecutions under his watch, barring the Schembri-Hillman-Nexia BT prosecutions that were triggered by magisterial inquiry requested by former PN leader Simon Busuttil.

“When will they charge John Dalli? Why hasn’t anyone been prosecuted over the role of 17 Black in the Montengro deal?”

“Why did they only charge Keith Schembri over things he did before he was in power?”

“Why hasn’t Konrad Mizzi been charged? Why haven’t they done anything over the theft of three hospitals?” “Are Silvio Valletta and Lawrence Cutajar going to be left running about? Why hasn’t anyone been charged over Panama Papers?”

“How are they acting with regards to the winner of the most corrupt politicians of the year [Joseph Muscat]?”

“How are people getting charged for robbing a can of tuna but brigands like Joe Cuschieri aren’t getting charged? How are the institutions reacting to everyone who has been mentioned in court and the public inquiry?”

“How can you sleep at night when you know that your lack of action continues to smear Malta’s name worldwide and endanger the jobs of Maltese people?”

“Prime Minister, police commissioner – the truth is clear for all, impunity still reigns under your watch.”

“How will Robert Abela convince the FATF that everything is fine in Malta when Mizzi and Cutajar are still MPs and Edward Scicluna is Central Bank Governor? As for the police commissioner, while your image is much much better than your predecessor, we are after results. We gave you the benefit of the doubt but we’re disappointed.

“We remind Abela that the only reason he is Prime Minister is that we protested in the streets and got rid of his predecessor. You are Prime Minister because of our cry against the corruption of your friend.”

Do you think Repubblika should call more protests?

READ NEXT: 'They Lied All They Could About Me', Rosianne Cutajar Says In Wake Of 'Double Standards' Hyzler Report