Performing a gig in front of a large crowd can be nerve-wracking – but performing in front of the Pope, the literal messenger of God to mankind, must be something else.

The Musical Society Beland Band brought their A-game during a series of performances in the Vatican City, including in St Peter’s Square and the Consevatorio Musica di Santa Cecilia, under the direction of Maestro Ray Sciberras.

“Sixty musicians from the music society experienced a historic personal moment, as they were given the opportunity to perform Maltese music… during an audience with Pope Francis on Friday 11th of September, 2019,” the Ministry said in a statement. The Minister for Foreign Affairs and Trade Promotion Carmelo Abela and his spouse, along with the Vatican Ambassador to Malta Frank Zammit, were also present as the band played away. 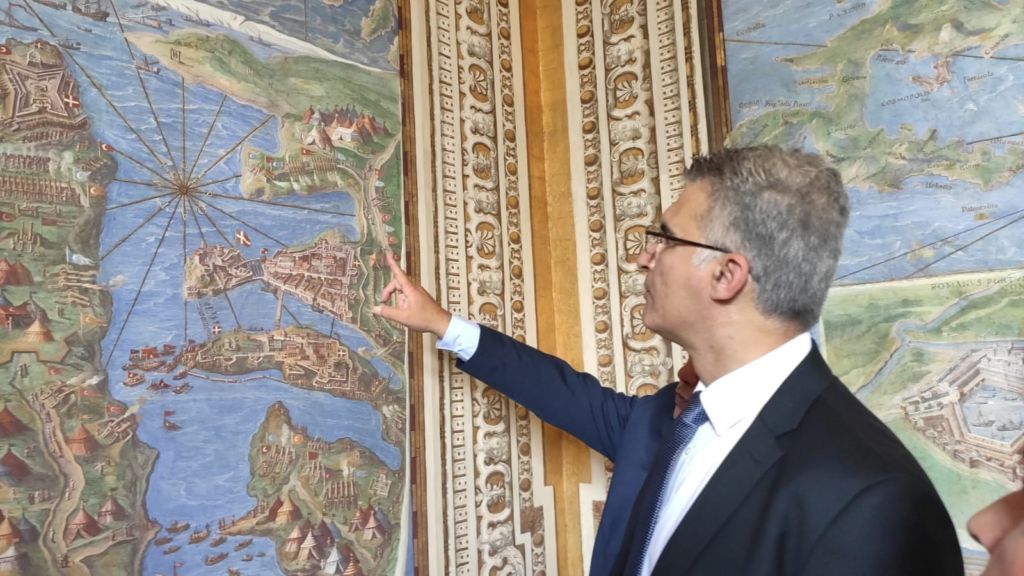 Minister Abela looking at an old map of Malta

Minister Carmelo Abela said that music was essential for diplomacy between different countries.

He congratulated the 60 musicians for their talent and mentioned that, although they are not full-timers, they are very dedicated

During his visit to the Vatican City, Minister Abela met the Secretary of State of the Vatican City Cardinal Pietro Parolin, the dean of the College of Cardinals Cardinal Angelo Sodano, Archpriest of the Papal Basilica of San Paolo Fuori le Mura Cardinal James Michael Harvey, and Secretary for Relations with States within the Holy See’s Secretariat.

They discussed the strengthening of relations between Malta and the Vatican and other topics of mutual interest, including the issue of migration and instability in Libya.

Minister Abela also held a cultural visit to the studio of the Vatican Mosaic, where he met with several restorers working on the creation and restoration of papal mosaic masterpieces. He also visited the Vatican Museums, where he was shown an old map of Malta at the time of the Great Siege. The said map was painted in 1579, fourteen years after the siege, and is now displayed at the Gallery of Maps.

The concert organisation was assisted by the Cultural Diplomacy Fund, which is managed by the Ministry for Foreign Affairs and Trade Promotion.

What do you think about this performance?

READ NEXT: Marie Louise Coleiro-Preca Meets The Pope, Gives Him Local Products, In One Of Her Final Acts As Malta’s President