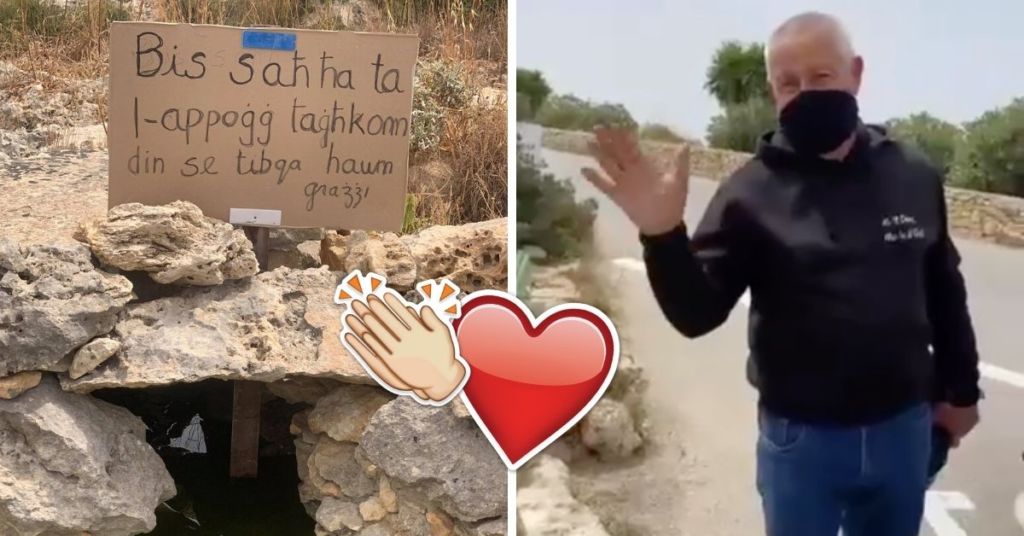 An elderly man ordered to remove a number of structures he had built in a remote area of Għargħur has thanked the public for its support as he continues to tend to the area.

Ronnie Gauci has erected a new sign besides a makeshift goldfish pond, proudly saying: “This will remain here due to the strength of all your support. Thank you.”

“We’ve managed, tell everyone thank you – and make sure you take photos of the goldfish,” he happily told passersby today as he stood by his makeshift structures in the area known as Top Of The World in Għarghur.

With a massive smile on his face, he let the public know that some of the most important structures he had built, such as the goldfish pond, were not going to be removed and were indeed still intact and looking better than ever. There was a major public outcry after news broke that Ronnie had been ordered to remove illegal structures in the area, with images of the man breaking down some of the pieces he had built and throwing them into a nearby skip going viral.

Many people praised Ronnie for his labour of love, a project that he started and funded of his own volition in an attempt to bring some creativity and life to the rural area. Residents had taken to social media to point out how dilapidated the area was before Ronnie stepped in and added his rock formations and pond and cleaned up the place.

However, he was ordered to remove parts of it as he hadn’t obtained permits for them, and was threatened with a €50,000 fine if he didn’t comply.

The Planning Authority itself took to Facebook to point out exactly which structures had been ordered to be removed following the public outrage.

However, with Ronnie back as his former happy self and a whole new sign near his pond thanking the public for their support, it seems like the man may still have some more life to give to Għargħur.

READ NEXT: Bernard Grech Urges Malta To Get Vaccinated As He Receives His First Jab