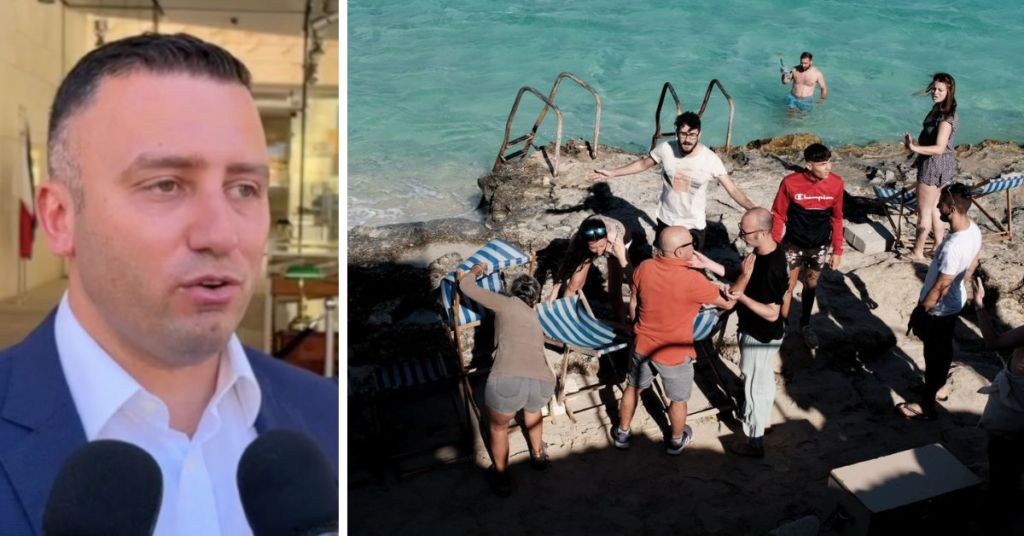 Malta’s Tourism Minister has announced a number of changes related to sunbeds and umbrellas on Comino after protestors took matters into their own hands over the weekend.

Speaking to journalists outside Parliament today, Clayton Bartolo said Malta Tourism Authority officials had long been working on the ongoing issues in Comino’s Blue Lagoon – namely, that two operators regularly take up the entirety of the small sandy beach and quay to set up rentable sunbeds.

“It just so happened that Moviment Graffitti went the same day as the MTA officials went there to address matters. You don’t just fix things from today to tomorrow,” Bartolo said.

Bartolo broke down changes to public accessibility for the beach.

“I think we all recognise that things have already been fixed, in the sense that the sand will be totally accessible to people, so no sunbeds or umbrellas set up on the sand, and there will be a substantial decrease in those set up on the quay throughout the day – and they won’t be there from the early morning.

“If you want to go in the morning with your own towel that’s fine, but you need to bear in mind that a large amount of tourists visit that bay and they ask for sunbeds to be there, so we need to find the balance – to say we should just remove everything may be the easiest, but not the best, idea. Sustainability comes from balance,” he said.

Protestors led by activist group Moviment Graffitti stormed the beach over the weekend to physically remove sunbeds and deckchairs, calling for equal accessibility for everyone. Their action was widely applauded, even from key people within the government’s camp.

Bartolo went on to say that changes to operator agreements had been made, and that the government will continue trying to enforce these laws.

What do you think should happen to Comino?

READ NEXT: Malta Could Be Off Grey List By End Of Week But Many Are Cautious Over FATF Plenary