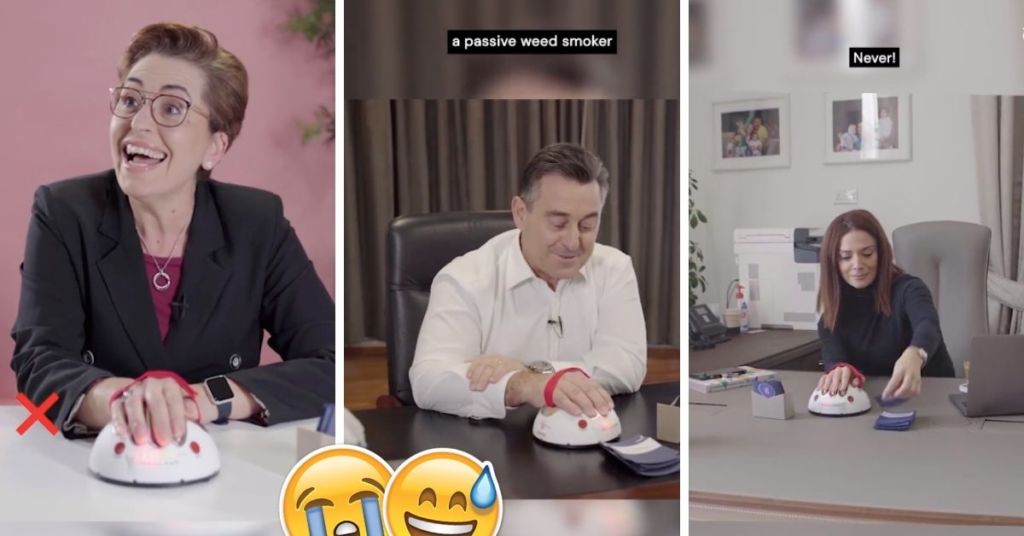 A new video featuring leading Maltese politicians hooked up to a lie detector test and asked if they’ve ever partaken in the cannabis plant reveals some interesting tidbits about the country’s leaders – and who is ready to lie to the camera.

“We are going to play a game, and it might shock you a bit,” the Gadgets team said as they hooked up the likes of Opposition Leader Bernard Grech, Energy Minister Miriam Dalli, Home Affairs Minister Byron Camilleri, Citizenship Parliamentary Secretary Alex Muscat, and PN MPs David Agius, Chris Said and Claudette Buttigieg.

Each politician is connected to the lie detector machine, and given a card which reads: Never have I ever smoked weed.

With the recent back and forth over cannabis and its regulation on the island, the question was bound to get some spicy reactions, leading some politicians to open up about their past use… and others to lie about it.

“Never!” says Miriam Dalli energetically… only for the buzzer to indicate that she had lied moments later.

“Yes I did,” Alex Muscat says casually, with the detector indicating that the man was not lying.

The PN’s David Agius and Chris Said answered with a straight no, while others tried to be more “diplomatic” in their answer.

“I was a passive weed smoker, it can be,” Bernard Grech says with a shrug.

“I cannot stand you,” Claudette Buttigieg laughs, before saying: “I was always in company of people who smoke weed.”

“So I’m lying,” Dalli says sheepishly when the buzzer rings for her.

Byron Camilleri – who had first opened up about his use with Lovin Malta – and Alex Muscat both get positive indications, showing that they didn’t lie to the camera in their answers.

However, when David Agius’ buzzer indicates he’s lying, he says “int orrajt hij?” before tinkering with the machine…

The fun video cuts right to the heart of the reservations some politicians have when it comes to the cannabis plant, which is seeing increased acceptance and regulation the world over. It also shows – if the lie detector machine is to be believed – that lying is practically second nature to some politicians.

Lovin Malta had set up outside Valletta’s Parliament to ask MPs whether they had ever smoked weed – check it out below:

Did you believe the figures that took the lie detector test? Sound off in the comments below

READ NEXT: 'Order More!': Patients In Malta Fed Up With Medical Cannabis Out Of Stock Every Other Month