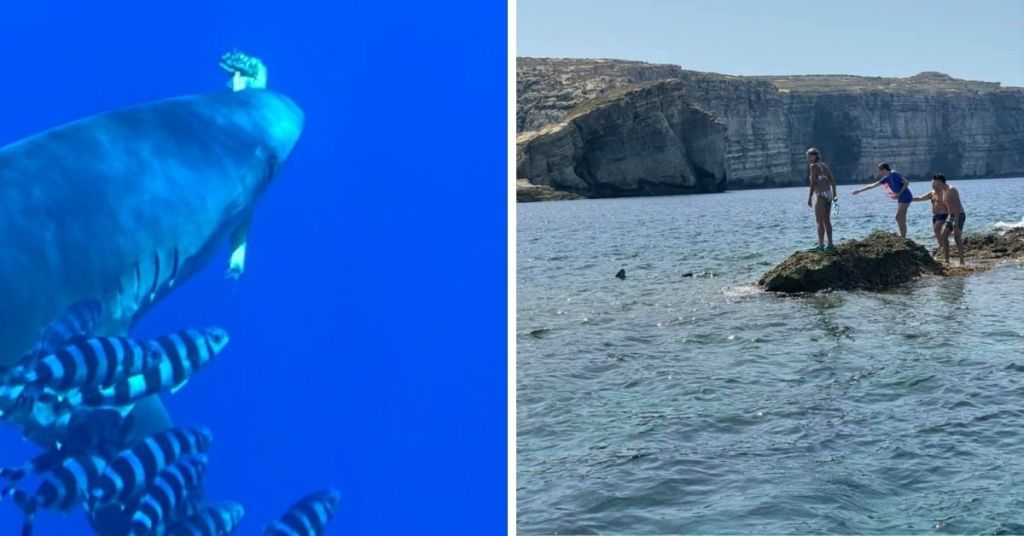 Swimmers and boat riders enjoying some sun and fun in a picturesque Gozitan Bay were surprised to see a curious shark appear surrounded by a shoal of pilot fish.

“Beautiful shark spotted today at Dwejra while doing a round Gozo trip. Something very unusual to see in our seas – and no its not a great white, so don’t be scared,” Vitamin Sea Watersports said in a Facebook post alongside photos of the shark, as well as people pointing at it while standing on a rock.

Though sharks are sometimes seen in Maltese or Gozitan waters, having one come so close to shore is a relatively rare occurrence.

Marine biologist Alan Deiden said it was a “curious blue shark” that was feeding near Crocodile Rock, Dwejra, earlier this morning.

“The shark is probably a juvenile since it was less than two metres long,” the expert said. “Blue shark attacks on humans are extremely rare (only four fatal ones have been reported globally to date) and we, as humans, do much worse to the blue shark.”

“For instance,” he continued, “the IUCN estimates that at least 10 million of these sharks are caught as bycatch annually each year. No wonder this species is listed as critically endangered in the Mediterranean, although it only enjoys a very low degree of protection in Maltese waters so far.” Just recently, another fisherman had uploaded a video of his encounter with a shark near the island of Filfla, Malta.

What would you do if a curious shark appeared near you while at sea?

READ NEXT: 'Comino Is Not Just The Blue Lagoon': Tourism Minister Speaks On Future Of Umbrella And Deckchair Bay