Polish women joined local pro-choice activists to express their opposition to the ban; last week, Poland’s courts ruled that abortion in the case of severe foetal impairment was unconstitutional, effectively banning over 98% of legal terminations.

The ruling has sparked mass protests in Poland, with thousands taking to the streets, defacing churches and clashing with riot police.

“Right now, there are thousands of Polish women expressing their outrage and disagreement – in the streets and on social media. We are joining them to protest against those inhumane laws,” Polish national and protest organiser Anna Cha told Lovin Malta.

“We are angry! We want to have a choice! We want to show that international solidarity of women is a powerful political tool. We support choice… the choice to make our own choices. Do not deprive us of our rights!”

The women held signs with slogans saying “I Wish I Could Abort My Government” and “Strajk Kobiet” (Women’s Strike in Polish), adorned with hangers, a symbol of unsafe abortions; and red arrows, similar to what is seen in Polish protests.

Even with this draconian ban backed by conservatives in the governing populist party, Poland’s laws are more lenient than Malta’s, because exceptions are still made for cases of rape, incest or if the mother’s life is in danger. In Malta, no such exceptions are made. 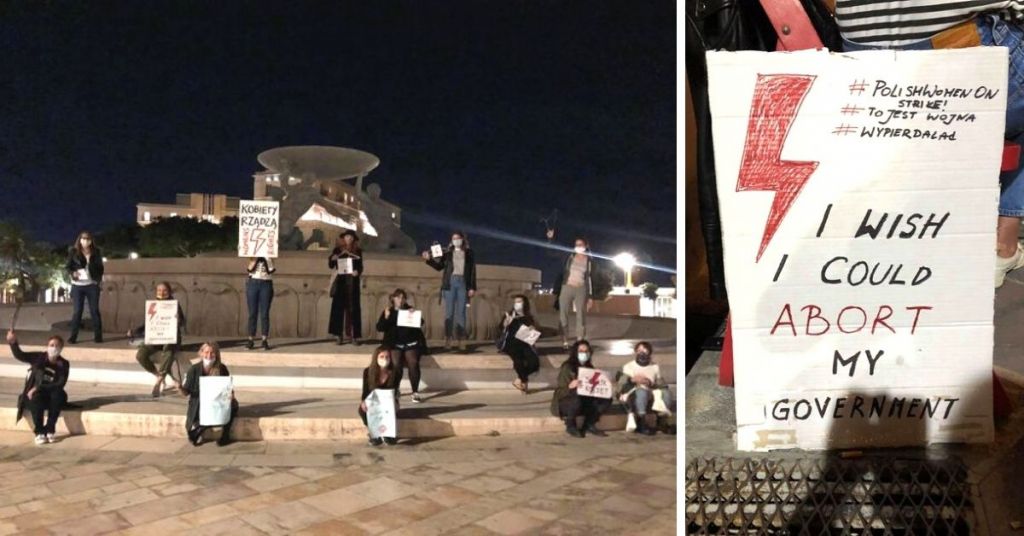 The European Council’s Commissioner for Human Rights has spoken out about the decision.

“Removing the basis for almost all legal abortions in Poland amounts to a ban and violates Human Rights,” Commissioner Mijatovic tweeted.

“[This] ruling of the Constitutional Court means underground/abroad abortions for those who can afford and even greater ordeal for all others.”

Another protest is set to be held this Friday. Attendees are asked to wear black to “mourn to loss of women’s rights” in solidarity with Polish women and all females around the globe.

What do you think of the protests?