Independence Day has become a day that the Nationalist Party uses to manifest its own greatness, seeing as it was a PN government which fought for Maltese independence back in the day.

However, it seems its historic greatness is all the PN has to cheer about these days.

It is an openly known fact that the PN today falls short on its once historic greatness. Just like its electoral track record, the party is struggling badly to attract youths into the fold.

Meanwhile, as the party suffers from chronic ‘youthlessness’, the Labour Party is crushing it among youth.

While Joseph Muscat has managed to establish a new generation of Labour politicians, the PN is fast becoming an ageing party, and ageing parties eventually become extinct parties.

However, hope is not yet lost and here are a few ways the PN can win back the trust of youths, which currently stands at a minuscule 7.3%, and transform itself into the force it once was.

Polling Numbers from MaltaToday indicating that Adrian Delia is only trusted by 7.3% of Maltese youths against Muscat's 52.3%. Red for Joseph Muscat; Blue For Adrian Delia.

1. Clear leadership – PN needs to get its act together

Frankly, this is quite obvious. Like all other people, youths have been put off by the very public factionalism that nearly ripped the PN apart in recent months.

Why would anyone join a party if all they can see is people from that same party attacking each other on social media and the PN’s own youth branches aiming occasional punches at each other? Why would they join a party which isn’t offering them a vision to get excited about?

At the end of the day, responsibility for party unity and vision falls squarely on the shoulders of the leadership. Youths will continue avoiding the party like the plague until its leadership gets its act together and unveils a fresh and clear vision of what Malta deserves to be.

2. Be open to liberal issues

Many youths are liberal at heart and if the PN wants to win them over, they must at least be open to discussing controversial issues that youths care about, such as the legalisation of cannabis. If these discussions are shut out, youths will continue flocking to the Labour Party without hesitation given their PR-friendly liberal front. The PN needs to update itself in current positions that will affect present-day society, as well as start planning for the future.

This is not to say that conservative youth aren’t valid or relevant to the party, but that progressive youth deserve a seat at the table too.

Apart from liberal issues, youths are very vociferous when it comes to education and the environment. The party needs to place these issues at the top of its agenda, not only through buzzwords and PR stunts but through concrete, ambitious policies.

It needs to promise to shake the system up, even if it means stepping on the toes of some of the most powerful people in the country. 4. Own up to its past mistakes

The party should properly own up to some colossal mistakes it has committed in the past as people still view the party as one with skeletons in the closet, a perception which is harming its credibility. The party should come forth and admit that its decision to expand development areas, which laid the groundwork for the environmental destruction of the current government, was a mistake.

5. Involve youths in what happens in the party – make them feel empowered

Outgoing MŻPN President Joseph Grech recently criticised the leadership for ignoring the youth-wing and its proposals, a move which spoke volumes when one considers he had backed Adrian Delia during his leadership campaign.

Youths need to be an integral part of the party’s decision-making process. Many say that youths do not want to have anything to do with politics but that is simply not true. Youths are very well interested in what is going on but they have been isolated. With the right tactics, youths will turn up in droves, and involving them within the structures of the Nationalist Party would encourage them even more.

This would mean having a youth wing that is active, that organises workshops, creates subcommittees and provides a link between youths and party structures. If youths see that they are achieving results, they would feel empowered to go the extra mile. 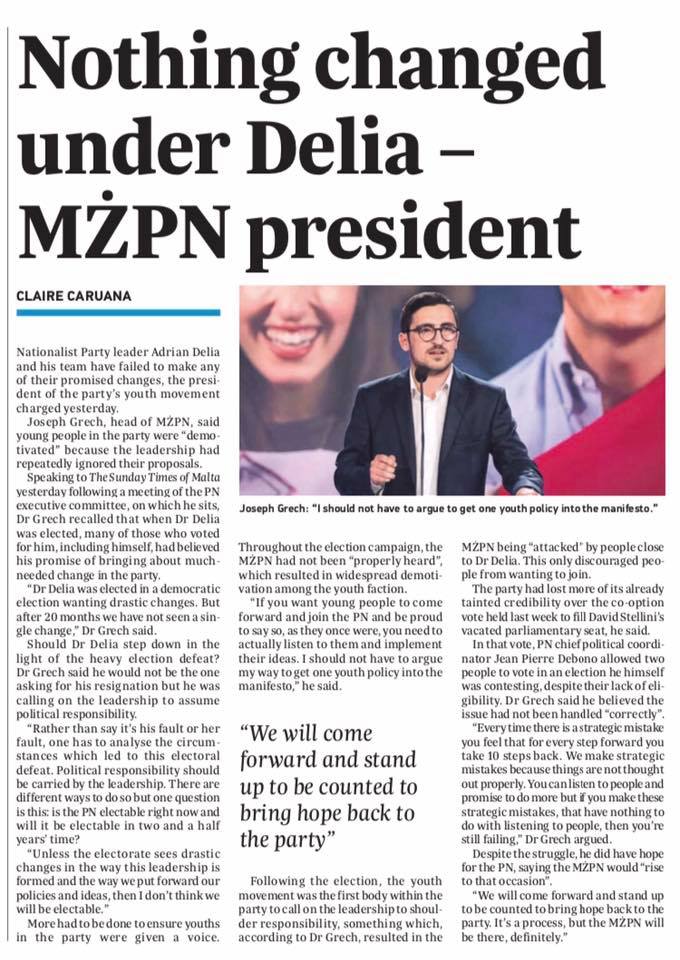 6. There must be one youth wing: It’s MŻPN or Team Start

Whatever the PN’s intentions may have been, the establishment of Team Start as a separate youth branch for 16-18 year olds, has only helped foment distrust among youths affiliated with the party.

The PN is struggling to attract youth as it is; it can ill afford splitting what youth resources it has among two groups who have often appeared antagonistic towards each other.

Factionalism attracts no one, least of all youths, and the PN must alleviate its mistake and reform Team Start as a branch or committee within MŻPN.

As the PN gets ready to bask in its glorious past, the party should bite the bullet and undergo a transformation process that will make itself attractive for the future generation of politicians. Otherwise, there may not be a PN for much longer.