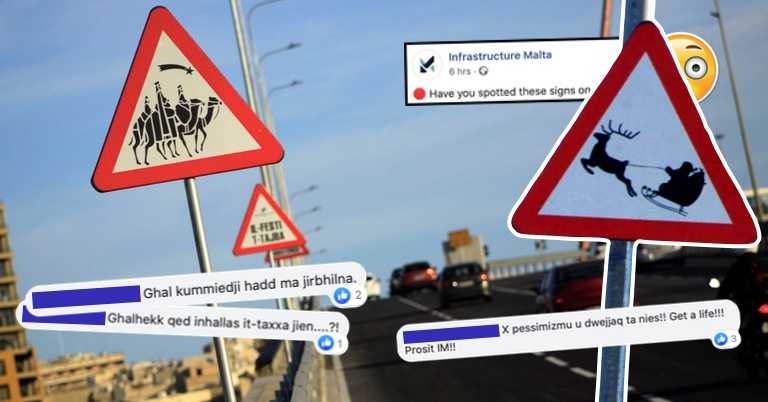 If you’re driving around in Malta this festive season, you might want to be extra vigilant; apparently everything from reindeer to camels could be crossing the street. At least, that’s what the latest signs would have you believe.

In a gesture just in time for the holidays, Infrastructure Malta put up a number of festive signs all over the islands, from Santa on his sleigh to more direct season’s greetings in both Maltese and English.

And while yesterday’s official Facebook post celebrating all of this definitely gained a lot of traction, not everyone seems to have taken to the gimmick with the same amount of affection.

“I think they’re making a mockery of the Highway Code,” one person said, with many echoing the fact that the signs actually proved to be very distracting  and “an absolute waste of taxpayers’ money”.

Others in the comments section, however, came to the defence of Infrastructure Malta’s initiative, saying “sad and pessimistic people” needed to stop complaining and “get a life”.

All we know is, you better watch out; Santa Claus is crossing the street!

What do you make of these signs?

READ NEXT: Bormla Dispute Escalates As Family Of Victim Attacked And Baby Injured – Police Arrest Aggressors And Charge Them In Court