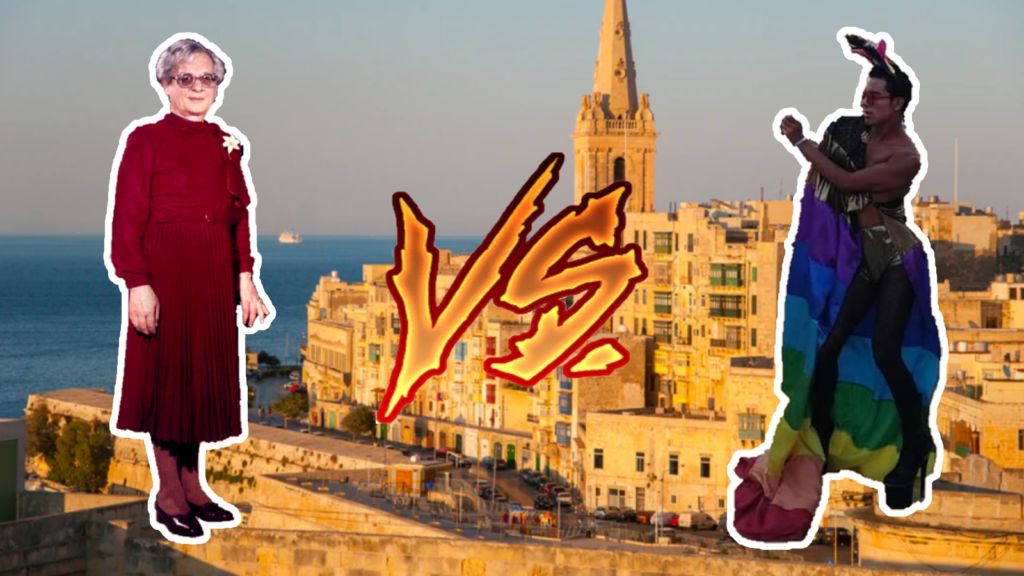 In the battle of gays versus lesbians, who do you think might come out on top? Is there a need for victory from a bracket of a community that marches in solidarity once a year? We’re here to find out, and also to explain just exactly what the crack is when it comes to the gender gap in sexualities.

In Malta, the gay/lesbian split is a pretty big one, but that’s mostly down to the fact that the lesbians have set up shop on Gozo

And can we blame them? Gozo holds the medal for still having a large, green coverage of shrubbery and flora, and, well, I know they don’t exactly teach this in schools, but lesbians love a good bush.

Oh wait, are you suggesting that girl-on-girl girls are after actual foliage? Because that would make the perfect segue to our first point:

1. Gays always go green with their diet, and the lesbians want up on the action now, apparently

Recently, in Malta, there’s been a huge health craze for fresh, organic, good, food. The gays gave their all and shared their dieting tips with their hags and slowly but surely, because of feminism or something, our secrets were everywhere and suddenly everyone’s twice-divorcee aunt was raving on about this little bowl of balance:

The next one’s not Malta specific, but hey, we just celebrated 50 years since Stonewall, so shut up.

2. Where were the lesbians during the AIDs epidemic?

History’s guess: right by our sides, actually, because they weren’t facing as much marginalisation as the gay male population was at the time… despite literally doing the same thing as gay men but with less of a need to clean up afterwards.

Yes, while most of us were in squatting in fear of touching the toilet seat for the sake of anyone else being able to use the loo afterwards, the sapphic ladies were out campaigning for our justice long before Diana. How very dare they.

3. They took the top spot of our acronym

The L in LGBT is for lesbian, not ladies, because as much as we gays would love to have our girlfriends in the bracket with us, we just can’t, because they’re usually cisgendered heterosexuals.

And if there’s anything a gay man hates more than receiving an unsolicited dick pic on a Sunday morning, it’s a cis-het. So, not only did the lesbians take the place of what could have been H for ‘hags’ (HGBT definitely sounds like a chemsex drug though, so maybe we should count our blessings), they also had to play the “we’re still women” card and let misogyny leave them in first place.

Does anyone like cheap, sliced ham? Yes, almost every man in Birżebbuġa and every bloody boon dagger in Malta and Gozo.

Don’t worry Leyona, your Subway order is safe – I’m here for the meatball marinara and I won’t be staying, I’ve got a glitter bomb to stuff or something.

Maybe they’re pining after some pre-birth issues, maybe they found the womb very comforting. All I know is that when I was ready to fly down the baby-chute, I held on for dear life and refused to leave until I was assured there was another way of getting out.

5. They confuse us, but that’s not their fault; it’s society’s for teaching us such strict gender norms

Ask any gay man to reenact the first time they were admiring a peachy behind from afar only to realise moments later that it belonged to a lesbyterian with a pixie cut and you will be entertained for years to come.

It happens, and it happens a lot. It’s part of the reason as to why I don’t venture over to Gozo anymore – I get this weird emotional mashup of a lusty FOMO and obsessive repulsion. No offence, ladies; you’re just not my blend of iced coffee.

6. Lesbians stole the feminist glory of Malta in the 80s

Agatha Barbara, the first female president of Malta (and longest-standing female member of parliament in Maltese history), was alleged to have smacked a clam or five in her time.

We say ‘alleged’ because there is no legit proof. You know you’ve hit the rumour mill jackpot when a half-Australian author decides to rewrite history only seven years after your passing.

There are a bunch of other reasons as to why we don’t always get on with our queer sisters, but there’s an equal amount of reasons for us to want to get along, too. Because, you know, we’re good at the whole equality thing and the rest of the world just needs to catch up.

Why can’t we just go back to the Roman times and all be bisexual again?

What do you reckon, shouldn’t we all just get along? Let us know in the comments below.

READ NEXT: Chinos At The Ready! Here Are 8 Reasons Why Malta *DEFINITELY* Needs To Celebrate Straight Pride