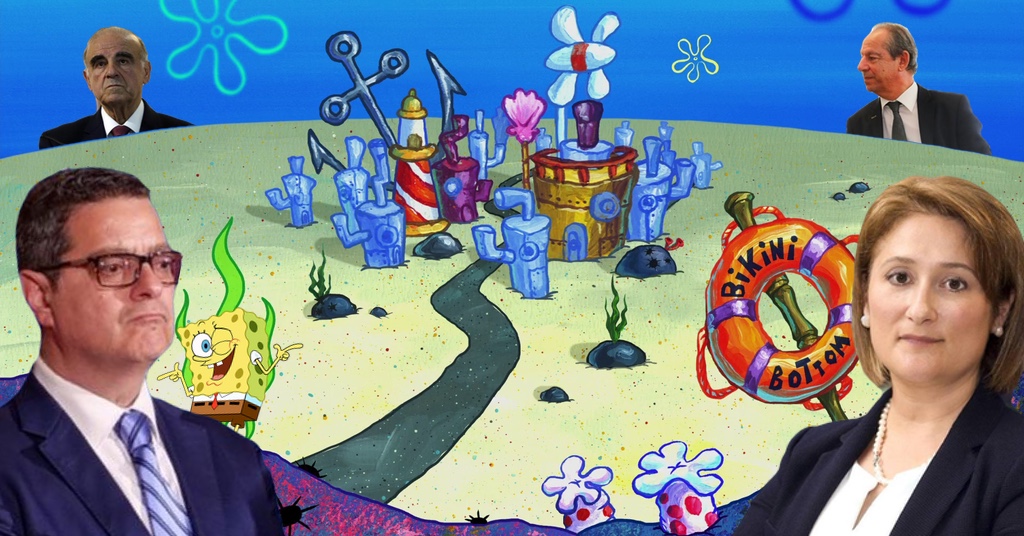 Are you seriously managing to keep up with the shitstorm that has been steadily brewing within the walls of PN’s Dar Ċentrali? If you’re like me, your answer is probably, “Well, yeah… I think.” Let’s do something about that.

We’re breaking down the latest trials and tribulations that are currently plaguing Malta’s Opposition Leader Adrian Delia and his party – starting from one month ago – in a way more digestible medium. And we mean way more.

In between there being approximately five billion SpongeBob episodes and iconic moments (not to mention the character’s sudden and unexpected resurgence in Malta’s political sphere), here’s a rundown of the recent Adrian Delia saga… as told by a bunch of SpongeBob GIFs. You’re welcome / I’m sorry.

1. It all started, as most things seem to do, with Melvin Theuma

During a reapparance at a public inquiry on 17th June, Daphne Caruana Galizia’s assassination middleman-turned-state-witness Melvin Theuma recounted how the main suspect, Yorgen Fenech, had opened up about his relationship with politicians… and how it wasn’t just with people affiliated with the Labour Party.

“He once told me how David Casa was hounding him over 17 Black,” Theuma said. “He said that he had offered money to the PN to see that he is not elected.” This seemed to tally with a 2019 claim by MP David Thake that Fenech had offered the PN €50,000 to ensure Casa was not reelected to the European Parliament.

Theuma might not have realised, but in one swift gossipy movement, he had just managed to throw the focus right back on the already-embattled PN Leader.

2. But it only took a couple of days for Keith Schembri to join the fray…

Just four days after Theuma’s testimony, Keith Schembri returned to social media for the first time in 2020, and it was as ominous as you’d expect.

The former chief of staff of former Prime Minister Joseph Muscat had been particularly quiet since last year’s shocking revelations into the Daphne Caruana Galiza case, especially after several connections were made between him and the murder.

“At last the time has come where tomorrow I will speak and reveal the truth,” Schembri said in a cryptic Facebook post on the eve of his return to court, this time in the police’s compilation of evidence against murder suspect Yorgen Fenech.

Not that most people would want to be in Delia’s position before Sunday 21st June, but this day really ended up being a double whammy for the Opposition Leader.

According to a poll commissioned by Times of Malta, the Labour Party registered a lead of 23 percentage points over the Nationalist Party, with Delia being trusted four times less than Prime Minister Robert Abela.

To make matters even worse, Delia didn’t even score highly within his own party, placing fourth out of five suggested leaders for the PN.

Those €50,000 to ensure MEP David Casa was not reelected in 2019 were brought back… but of course, Keith Schembri was ready to take it all one step further.

Under oath, Schembri said with “100% certainty” that Delia actually took the money, while former PN Head of Media Pierre Portelli would meet with Fenech once a month to collect €20,000.

More importantly, allegedly dated back to March 2019… that is, after Fenech had been revealed as the owner of the secret company 17 Black.

“We are always behind you no matter what,” Fenech told Delia in a message sent on 19th March 2019. Shortly after, the Opposition Leader was also asked if he was up for a casual meal with the murder suspect, to which he reportedly replied he’d ask Pierre Portelli to organise.

Keep in mind, this is 5th July… just two weeks after literally everything else up till now.

6. Delia replies… saying this has all been “created” by the Labour Party

“There are criminals who seized power and who are trying to intimidate those who are fighting, step by step, to stop their corruption and theft and ensure they pay the consequences.”

On Sunday 5th July, it seemed like the leaked WhatsApp conversations between Delia and Fenech were the last straw in a string of allegations and poor poll performances. By the morning of Tuesday 7th July, the PN’s parliamentary group was set to meet in the evening.

Let’s not forget; this time last year, a confidence vote had been called following abysmal performances in the MEP and local council elections. Delia had survived that time, but sources suggested he would face the group would push through a vote to replace him as Opposition Leader in parliament.

The meeting kicked off on Tuesday evening… but by midnight, the lights at Dar Ċentrali were still on, the commotion outside was still being livestreamed all over Facebook, and it seemed like we were no closer to any closure.

8. A vote arrives after all, Delia loses… but he says he’ll be staying on anyway.

Then, at 1am, it was revealead that, in a secret ballot, Adrian Delia had lost a confidence vote as Leader of the PN parliamentary group.

Out of 30 votes, Delia received 11 votes of confidence, and that’s counting his own vote. Meanwhile, 17 MPs and 2 MEPs voted against him.

In a surreal press conference at 1:30am, Delia refused to resign, saying he respects the outcome of the vote, but he’ll be staying on as the elected PN Leader.

9. Finally, the question “If not Delia, then who?” is answered

Just two days after Delia lost the vote of no confidence, a number of PN MPs chose who they believe should become Malta’s next Opposition Leader… Therese Comidini Cachia.

A different role to that of PN Leader, Malta’s Opposition Leader needs to be a sitting MP. Claudio Grech, who had been previously touted for the position, declined the role.

And if you don’t know who this woman with a surname that sounds like a piece of furniture is, you need to read this.

10. Enter the president, who spends the Friday meeting PN MPs

By the end of the day, though, Vella had met with the rest of the PN MPs, eventually concluding that the majority of them want Delia removed from Opposition Leader. In fact, it turned out 16 Opposition MPs (the majority of the PN parliamentary group), declared to the president that they did not have trust in Delia, while 11 said they still trust him. One MP, Stephen Spiteri, abstained, even though he had voted against Delia just three days before.

11. The President’s final deliberation?  Silence for a whole weekend

This whole issue had arrived to this point because, constitutionally speaking, Malta’s President should revoke the appointment of the Opposition leader if another MP gains the support of the majority of Opposition MPs. For context, that’s exactly what happened here.

With all of the PN (and the country, in a weird mix of anxiety and entertainment) eagerly waiting for the president’s final say on whether or not he’d remove Delia, we got the answer within hours.

12. And then, on Monday, President Vella finally released his statement… saying he had decided against removing Adrian Delia

Literally admitting he’d be “departing from the written word of the Constitution”, Vella stated his decision shouldn’t stifle “mature discussion” within the PN on what measures it should take to solve its leadership crisis.

The whole statement is a ride and a half, and you can read it in full here.

Needless to say, the “absolute majority of PN MPs” weren’t happy, with a joint statement saying he had “failed to uphold the constitution”.

Interviewed on Realta’ on Monday night, the Opposition Leader pledged the massive changed in his shadow Cabinet, strongly signalling that he will sideline MPs who still oppose him in the wake of the President’s decision.

“I was ready to shoulder responsibility for my decisions and everyone must do the same,” Delia said. “The decisions they must make are clear. They have no respect for the President, the Constitution, the PN statute or the party members, so one must reach the conclusion that they only respect themselves.”

Set to attend an expectedly tense PN Executive Committee as it is within his right as a former PN leader, it was reported that Gonzi would participate in the discussion and any votes that occur. It was also believed he’d oppose any punishment taken against any of the MPs who voted against Delia in the previous week’s vote of confidence.

But for a lot of people, all this news boiled down to was just one phrase: GONZI IS BACK.

15. A motion of no confidence is tabled, a vote is taken… and Delia loses again

In a statement, the PN confirmed that 47 members voted against Delia, while 36 voted in favour of him and one abstained.

Yep, you read that right. And honestly, why should you be surprised?

After losing his second internal confidence vote in as many weeks, Delia stated he had no intention of resigning.

“Our statute is clear that tonight’s vote has no consequences,” Delia said after the PN executive council. “Tonight’s vote was cast simply to make a declaration. I’ve already stated time and time again that I will remain leader so long as our members (tesserati) want me.”

That was last night, and this is where the Adrian Delia saga ends… for now.

Of course, more updates keep coming in every couple of hours… including the new revelation that Delia spent at least €13,000 of PN’s money on his personal Facebook page.

But while all of this is happening, Delia is still the PN leader, and it looks like no amount of angry Facebook statuses, actual parliamentary votes, or even SpongeBob memes can do anything about it.

Tag someone who doesn’t really follow politics but loves SpongeBob.