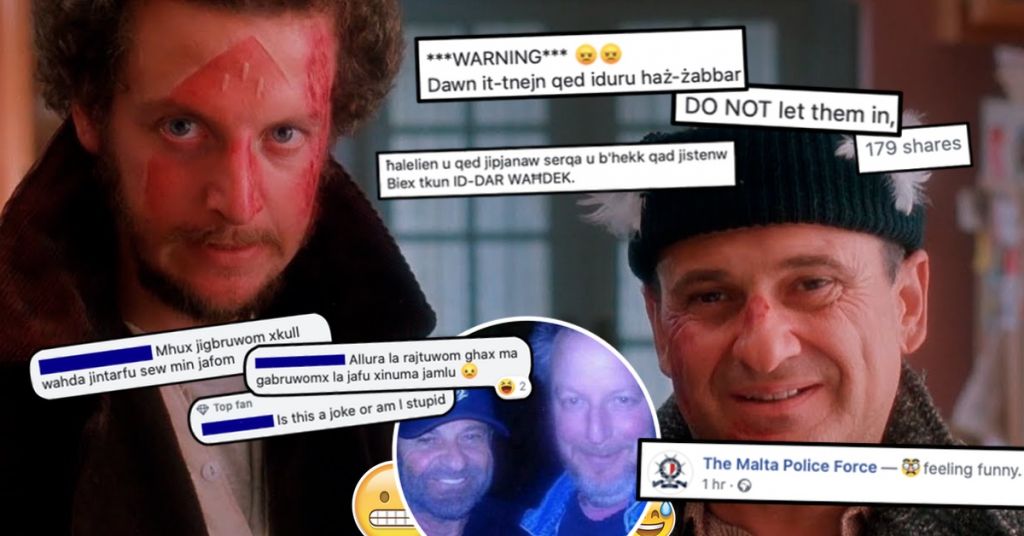 Warnings of criminals roaming our streets should always be taken seriously… but maybe, if you recognise faces from one of the 90s’ biggest childhood films, you should take things with a pinch of salt.

Shit hit the fan last night when local meme page Buzzulotti – Malta posted a satirical warning of robbers who were reportedly knocking on doors in Żabbar (or Mellieħa, depending on which language you decided to write the warning in), claiming to be from the council.

“DO NOT let them in, they ARE NOT from the council!” the page warned. “The Filthy animals are checking if you’re home alone! #WetBandits.”

If those three explicit references to the 1990s classic film Home Alone weren’t enough, the page even went so far as to share a photo of Harry and Marv, the clumsy criminals played by Joe Pesci and Daniel Stern.

And while many were quick to get the joke, others actually took it seriously.

OK, so a page called Buzzulotti shares a photo of two popular American actors, calls them Wet Bandits, and everyone leaves Home Alone GIFs in the comments section. What do you do? Panic and share it on your wall, of course.

179 shares later, as hundreds of people shared the humorous post for what it was, others were actually taking it seriously, asking whether it was Żabbar or Mellieħa, or getting ready to fortify their own house against the criminals.

But in the wise words of one particular reader, “Is this a joke or am I stupid?”

The next morning, the Malta Police Force ended up addressing the issue with their own humorous take on the post.

“We would like to inform the general public that the below criminals have been u̶p̶p̶e̶r̶h̶a̶n̶d̶e̶d̶ apprehended and will be prosecuted accordingly!” the official Police Force Facebook page announced, sharing the original post.

“Special thanks goes to eight-year-old Kevin for his intel.”

Just to be 150% sure that no one actually believes it a second time round, the Malta Police Force ended things off with a couple of hashtags, from #JokePost to #FakeNews.