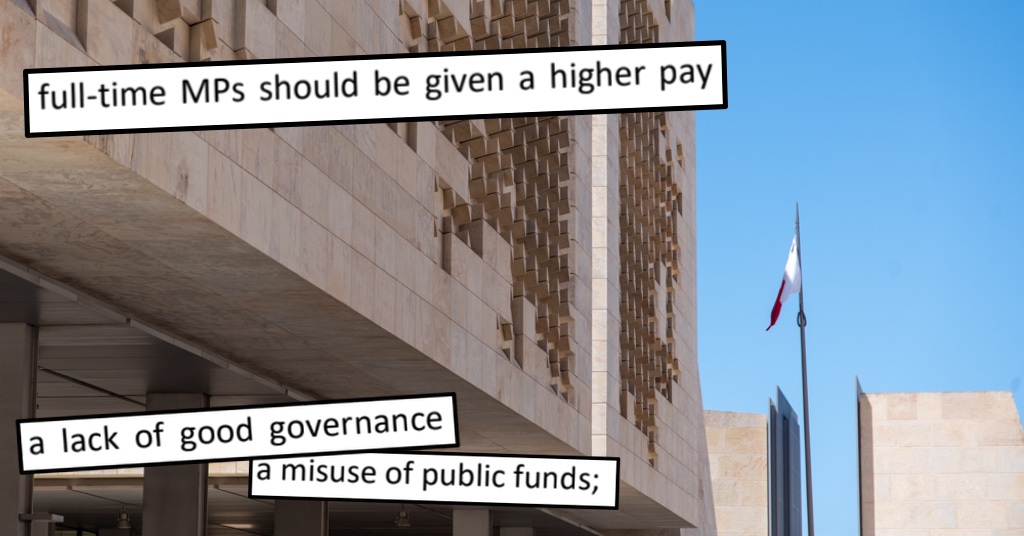 Malta’s MPs who are also employed within the public sector are abusing Parliament’s attendance rules… but it could all be solved if they switched to full-time and got a higher salary, Standards Commissioner George Hyzler has reaffirmed.

The suggestion was made as part of a new report issued by the Commissioner in light of a long history of abuse within the halls of Parliament.

“The rules whereby members of Parliament in public sector employment can be released from work to attend parliamentary activities is being abused,” the report clearly statets, a conclusion which was reached “after considering a complaint against opposition MPs who work in the public sector and who allegedly were not turning up for work on a regular basis.”

The particular complaint goes back to February of this year, when Opposition MPs were told to report for duty at their place of employment or be fired.

Among them was former Opposition MP Kirsty Debono, who reportedly only showed up to work about a dozen times throughout her four years with the Malta Gaming Authority.

“The Commissioner found that according to the rules for public employees, members of Parliament who work in the public sector are entitled to attend parliamentary activities that take place during office hours,” the report continued. However, he found that the system is being abused due to MPs absenting themselves from work without proper control, even to attend political and constituency activities. MPs are not entitled to attend such activities during office hours.”

“The fact that this is being tolerated by government entities represents a lack of good governance that should be addressed.”

Going one step further, the Commissioner said this practice “constitutes a misuse of public funds”, “amounts to an abuse of individuals’ positions as members of Parliament”… not to mention “undermines the trust the electorate should have in its political representative.”

A long-standing issue in both current and previous administrations, this has frequently led to the argument that Malta’s MPs need a substantial pay rise if they’re expected to do a better job.

Seeing as the conclusion was reached that this practice “discriminates between MPs who are employed in the public sector and other MPs who have to keep up with their day job (outside Parliament) in order to earn a living”, Hyzler once again called for a change in the system.

“As a solution, the Commissioner therefore reiterated his proposal that all backbench MPs should be given the choice of working full-time as MPs, and those who opt to become full-time MPs should be given a higher pay than those who opt to remain under current parliamentary arrangements as part-time MPs,” the report concluded. “If such a system is introduced, the law that permits MPs to continue to work as government employees should be repealed, save that these MPs should have the right to return to their jobs when their term in Parliament ends.”

“In this way, the scope for abuse would be eliminated and at the same time MPs would no longer be dependent on the government of the day.”

What do you make of this? Do you think Malta needs full-time MPs with a better wage?

READ NEXT: Here's How Much Malta's Politicians And Political Figures Are Getting Paid